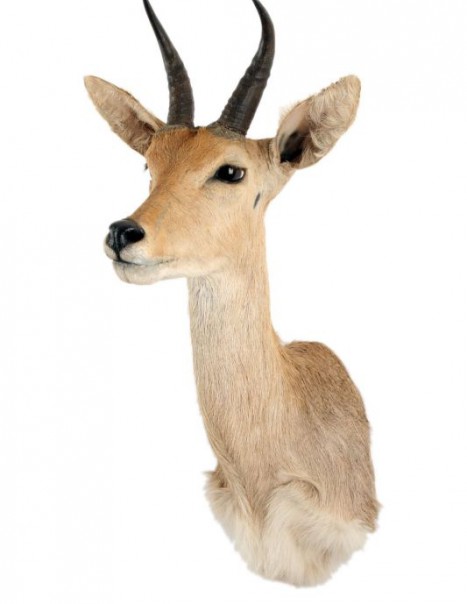 It is an antelope which belongs to the Bovidae family.

This is a kind of antelope, measuring 60 to 80 cm in height and 1.20 meter in length. With a tail of 20 centimeters. The male is the only one to have horns, about 30 centimeters in length and slightly rolled up, hook-shaped. It usually weighs 20 to 30 kilograms. However, females are smaller than males.

They live in mountainous areas in sub-Saharan Africa, with a source of water nearby. However unlike other antelopes in Africa, Redunca does not migrate, it sets up the whole year in one place.

The mountain reedbuck has a grey coat with a white underbelly and reddish-brown head and shoulders. The rest of its neck is red-brown. It has a bushy tail. Below the ears, the male and female have a black spot. What makes them special.

The Redunca feeds on grasses, leaves, its diet is only herbivore.

It forms herds of around five individuals, including a single mature male. Young males are forced out of their herds and form small bachelor herds. In the dry season, the mountain reedbuck sometimes forms herds of up to 30 individuals. They are diurnal, but inactive during the heat of the day.

The Redunca is monogamous and breed throughout the year but usually in summer and autumn. Gestation lasts 8 months, the female gives birth to one baby, generally.

Its life expancy is estimated at 18 years, on average, when it is not the victim of a lion, a cheetah ..
It was also driven by humans for sport hunting.

It is listed today in the IUCN, Institute for the Conservation of Nature.