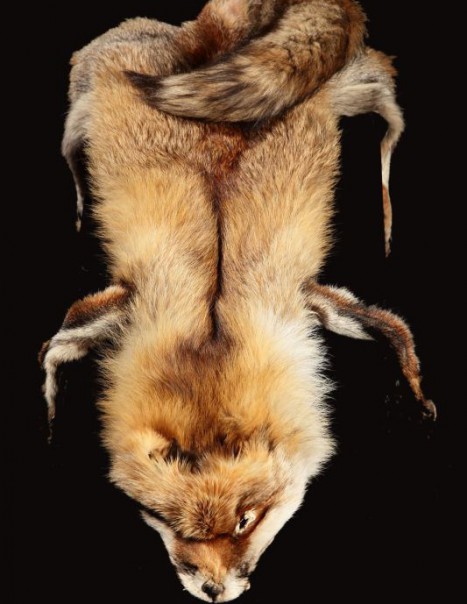 We realize many carpets/rugs with skins of animals. The most popular are zebra carpets , but we can also realize them with more rarer skins as tiger or cheetah. Those carpets can be made with or without felt.

The red fox is the most common species of fox and the best known in the world. It belongs to the family of mammals. Its coat is white and red, its nose is pointed, its ears are straight til. It belongs to the classification of Carnivora.

The red fox lives in most of North America, Europe, Asia and finally in several regions of North Africa, Japan and India.

The male measures 112 cm and weighs 5.9 kg while the female measures 108 cm and weighs 5.2 kg. The fox has large ears that allow it to have very acute hearing. Its tail is bushy and almost as long as its body. It has 42 sharp and hard teeth because it has a solid layer of enamel that is renewed every year of its life. Its fur has two layers.

Its diet is primarily omnivorous with carnivorous dominance. It primarily feeds with rodents and rabbits, but also insects, fish or fruit when there is not meat.

This animal like burrows abandoned by badgers and marmots. Once it is cold, red fox has a place to shelter from the wind, usually a hollow beside a pile of snow. So as soon as autumn comes, red foxes have a thick fur to face the harsh season.

The fox and the vixen stay together all their lives. Gestation lasts about 53 to 63 days. When the birth of the cubs approach, parents seek for a comfortable den. The mother may have from 4 to 9 youngs.