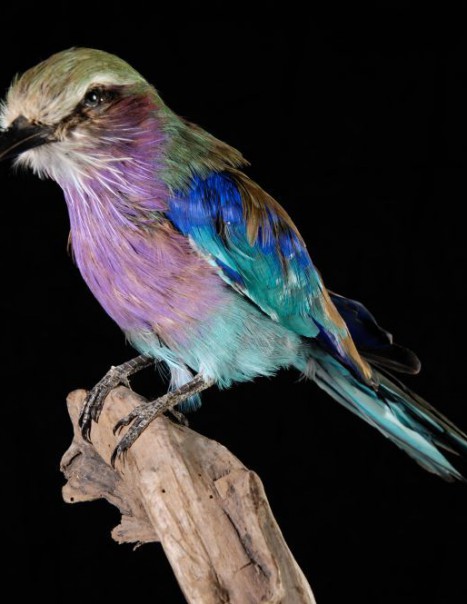 The European roller belongs to the roller family.

It’s a brightly colored chunky bird, surmounted by a big head with a thick black beak, hooked at the end. The forehead, chin and sometimes the cap edge are white. Lores and bare skin triangle at the back of the eye are black. The head, chest, part of the wings and tail are a nuanced blue estate green. The rest of the wings and the tail is black with a slight touch of purple. Male and female are similar. Young are duller than adults. Expected life is 9 years old

Habitat should include both, cavities essential to its nest, it looks in the alluvial forests and avenues of plane trees and poplars, and open areas with open spaces conducive to hunt insects that it finds in wine wastelands, cultivated fields, clear groves and woods, meadows and sand pits. So we find it in the hot plains, sunny and avoids regions where the climate is unstable and humid as in the northwest of Europe. Specialists officially recognize two subspecies which slightly vary in color.

It lives alone or in pairs. It is a migratory bird. In late August or early September, it takes its winter quarters south of the Sahara and did not return until late April.

The male performs a spectacular aerial courtship. These are followed by acrobatics dives to great heights during the breeding season.

It does not make a nest. It lays its eggs in an old woodpecker nest in a cavity of a pine or oak, at a height that varies between 5 and 10 meters. It brings no material in the selected cavity. The female lays 4 to 6 eggs with incubation about 18 or 19 days. The young fledging occurs after 26 to 28 days. The nesting season runs from May to July, with a peak from mid-June to mid-July.