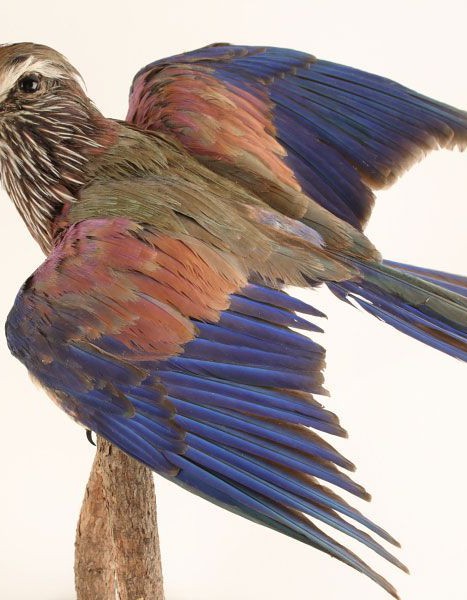 The abyssinian roller, like all rollers, is probably one of the birds that every birder or photographer like to meet. Its colorful plumage catches the eye. Forehead and chin are white, black eyes are marked with a black clear line that goes up to the beak which is black. Its neck is turquoise blue, we can clearly distinguish three different shades of blue on top of the wings.
It is found in Africa from Senegal and Gambia to Ethiopia, Sudan. It crosses the Red Sea and is also found in Yemen and Saudi Arabia. It likes woodlands alternating with meadows or cleared tracts.

It is often perched in large trees and on electric poles along the roads. It will make its nest in tree holes, sometimes in old termite mounds. It is also seen nesting in uninhabited houses. The breeding season is from February to July, the brood is from 2 to 4 eggs.

It feeds mainly on insects and caterpillars, they follow the herds of wild ruminants such as antelopes and enjoy the insects around them.