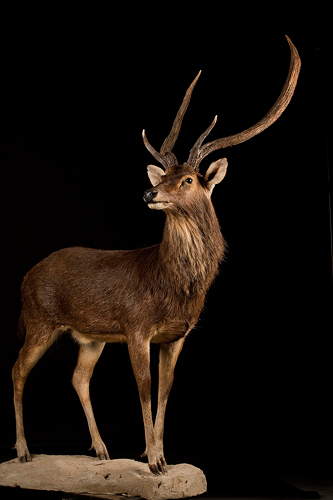 The sambar deer is a ruminant mammal of the order Artiodactyla and belonging to the deer family.

The male can reach 1.6 m in height at the withers, making it the biggest deer of Asia, with a weight ranging from 220 to 300 kg. It wears a brown-black dress one color with a dense mane on the neck. The woods of Sambar Deer can reach 1.1 m in adults. A white area around the mouth is also present under the tail.
The female is smaller, with a lighter color with less mane. Sambar deer is a very good swimmer, allowing it to easily escape predators such as tigers or lions.

Native to South Asia, mainly found in Sumatra. It can be seen in India, Sri Lanka, China, Indochina, the Philippines and Borneo. Recently, the species has been introduced in Australia, New Zealand and the United States.

Males are usually solitary, while the female usually lives in small herds. They live in large tropical forests and also near lakes and marshes where some plants are found.

The reproduction of the species occurs throughout the year. The period of heat lasts about 18 days, during which the male determines a territory in which it will attract the female to coitus. The gestation period lasts 8 months, giving birth to a single fawn, or very rarely, twins. The offspring weighs 5 to 8 kg and remains the only deer to have no white spots. Young begin to ruminate after a month.

Life expectancy is on average 12 years in the natural state and 28 years in captivity.

According to IUCN conservation status, Sambar deer is considered vulnerable (VU), with a high risk of extinction in the wild.