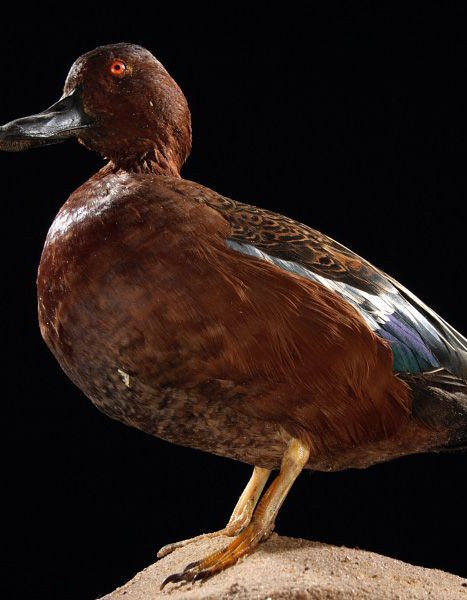 We find cinnamon teal on the American continents.

This duckling measures about forty centimeters and weighs 500 g. It can live on average 10 years.

It loves the deep freshwater such as ponds or lakes. It can also be seen in the marshes. It must have access to a water point. Like all ducks, teal spends much of its time in the water.

The male and female are not of the same color. The male has a cinnamon colored plumage on the head, flanks, abdomen and chest. The feathers of the back and tail are black and green with white tips. It has some blue feathers on top of the wing. Its beak is black and its legs are yellow.
The female is entirely brown and black. Each of its feathers is made up of two colors. Its beak is gray and its eyes are brown.

Cinnamon Teal feeds primarily on aquatic plants, but it does not disdain insects and molluscs.

After a long parade complex, the female builds a nest without the help of the male. It always puts it near a water point, hidden in the tall grass. Stems and dried herbs are the main constituents of the nest. The female also adds to its a duvet. It lays a dozen eggs. It will incubate a little more than 3 weeks. The ducklings follow their mother until they fledge. They imitate to eat properly and protect in the tall grass. The male is not involved at all in raising ducklings.

Teals are prey for many animals. It also undergoes parasitism by other ducks.

In addition, they suffer the destruction of their natural habitat. The draining of the marshes to make cultivable areas is one of the main problems that are responsible for the declining populations of cinnamon teal.