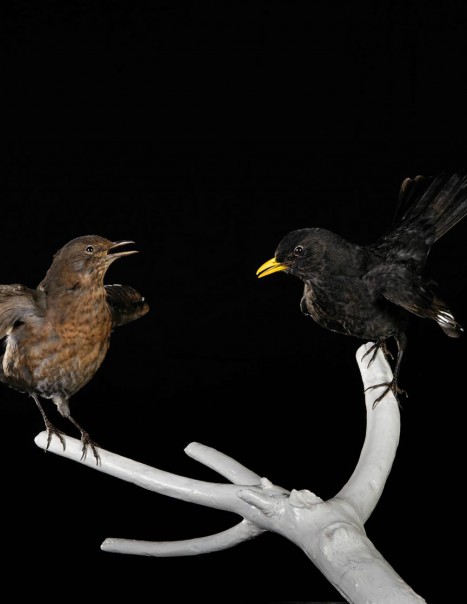 There is 9 subspecies of blackbird.

The cry of the blackbird is hysterical when alert. The cry in flight is tenuous and flickering.
It lives in all kinds of forests and woodlands with undergrowth, forest edges, in shrubby areas, crops, hedgerows, parks and gardens, even in urban areas. It flies low to the ground and travels short distances. It can also have a quick flight with rapid wing beats.

It nests in hedges, thickets, shrubs or deciduous shrubs. Pairs form at the beginning of winter and the first nests appear at the end of cold periods. The female builds the nest and the male brings materials. The female lays 3 to 6 blue-green eggs, spotted with reddish-brown. Incubation lasts about two weeks, by female. The male can
replaced her for a short time when it leaves the nest. The young leave the nest after 12 to 13 days after birth. The parents feed them for three weeks and they are independent after a month.

During the breeding season, violent territorial fights are rare, two males can fight face to face, crying, with fingers and claws outstretched toward each other.

It has a longevity of life of 16 years.

Blackbird has predators such as domestic cats and crows.