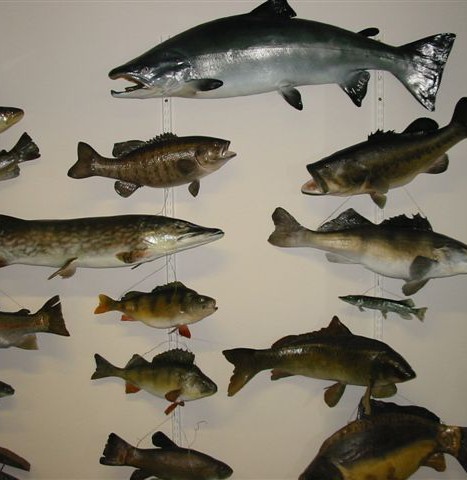 The Atlantic salmon is a species of fish belonging to the Salmonidae family. It lives in temperate, fresh and cold zones in the Atlantic Ocean.

It is high intensive fish farming in the sea and, therefore, in floating cages for years. Norway is the largest producer. Its maximum length is 150 cm for males and 120 cm for females, for a maximum weight observed at 46.8 kg. Its maximum lifespan observed is between 4 and 6 years

It is originally present in the Atlantic Ocean. This range includes the Baltic Sea and extends up to Russia. They return to their native river to the sources, the catchment basin until spring.

The sexually mature adult has increased from one to three years at sea, which explains the differences in size of salmon. When he returns to breed, we shall then appoint the rédibermarin and weight can vary from 2 to more than 20 kg.

Eggs are laid in autumn and spend all winter buried in the gravel, oxygenated by rapid river water. Hatching occurs in March or April, depending on the temperature. They remain 5 to 6 weeks feeding on the content of their yolk sac. In late April, early May, the fry emerge from the gravel and begin to feed on insect larvae. They go where the river is shallow and large current.

After two to three years in the river, sometimes more, parr are about 12 to 15 cm and are ready to go to sea in the spring. Their livery becomes silvery, almost identical to that of adults.