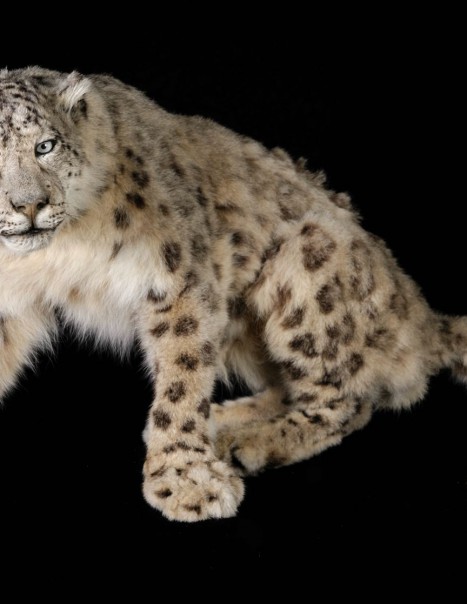 The snow leopard is part of a kind of high mountains cats. It belongs to the genus Panthera, hence its scientific name Panthera uncia.

Snow Leopard has a thick and long coat, whose color ranges from pale gray and cream gray. Its neck and belly are off-white and dorsal side is sparse with dark spots allowing it to hide. Its ears are rounded and short. Its big paws covered pads preserve the rigors of winter. With a length of 90 cm to 1.30 m, an adult weighs between 35 and 55 kg. Its tail, which is used to balance when climbing the dangerous ledges, is 90 cm to 1 m, representing 75% of the length of its body.

This animal lives alone and occupies a large area, which is usually below the limit of eternal snows of central Siberia Mountains, Central Asia and Altai. Its broad chest and lungs allow it to get used to the lack of oxygen at altitude between 2700 and 6000 meters and 1000 meters in summer and winter.

Animal difficult to observe because of the difficulties to access its habitat, its habits are quite badly known. Its food is made of Tibetan gazelles, markhor, tahrs and ibex hunting by travelling long distances. Small game such as rabbits, marmots and pikas are also part of the menu. It can continue at night with its eyes adjusted to the low light. Snow Leopard is among the best jumpers of the species of cats, with a jump of 10 meters to catch prey.

Its breeding season is between late January and March. The female gives birth to 1 tot 5 pups per litter, after a gestation period of 90 to 104 days.

It can live 15 years in the wild and up to 21 years in captivity.

Threatened because of its fur and bones, there remains approximately 3500 to 7000 snow panthers in the world.