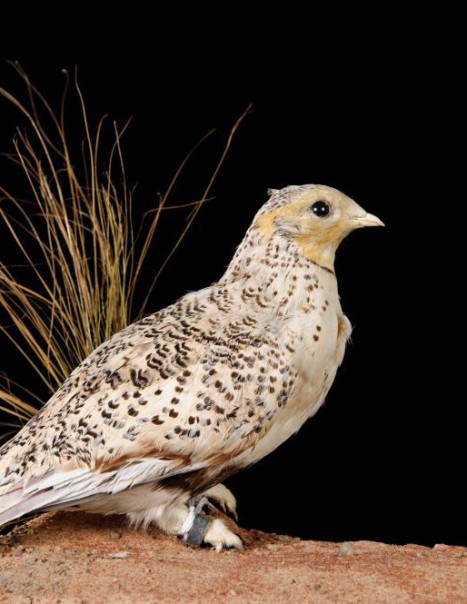 The Pallas’s sandgrouse is a medium sized bird belonging to the family of Pteroclidae.

Its tail has a length of 30 to 41 cm. Its tawny plumage, striped on top, with a black spot ventral and the undernside of the wings is pale. The male has a gray head, an orange face and a gray breast band. This band is absent in the female; it has crossed over more and more dull. This bird has a small head, resembling that of a pigeon but with a robust and compact body. Its wings and tail are long and pointed and it has a fast and direct flight. The groups fly to waterholes at dawn and dusk. Legs and feet are feathered.

This species nests in middle latitudes of Central Asia, in the dry steppes, or in similar environments. Nest is a depression in the roughened surface of the ground, in which 2 or 3 greenish camouflaged by spots eggs are laid.

It is a partial migrant, the importance of the southward shift depends on the amount of snowfall. Since its normal range of nesting and wintering, Pallas’s sandgrouses makes occasional irruptions that lead it across Europe to Britain and Ireland. The reasons for these remarkable movements are not fully known, but these invasions have become less frequent, probably because of the reduction in the western part of its range in Siberia, due to the transformation of the steppes by agriculture.