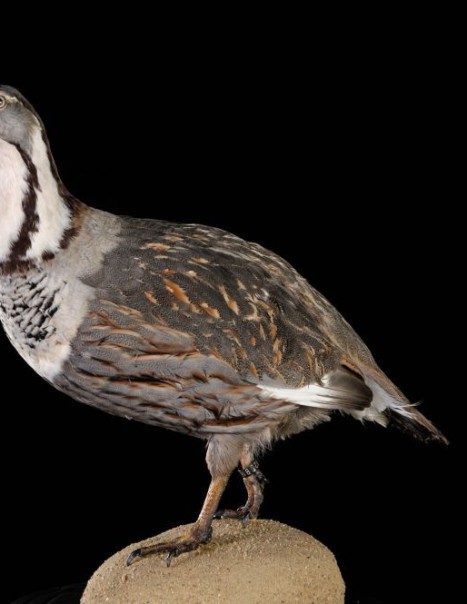 The himalayan snowcock belongs to the Phasianidae family.

This noisy bird is a species that prefers mountains rocky ledges of cliffs and steep slopes. Its cryptic plumage provides good camouflage in its stones and debris habitat. It attends high steep slopes from the line of the last trees to the edge of the first snow. It is often found in pastures in the mountains and rocky ridges. But it also frequents steep valleys and rocky outcrops at very high altitude. This species is visible between 3600 to 4600 meters above sea level in Pakistan, as it is native to Asia, India, Nepal, Pakistan and Tibet.

The adult male is like a big gray partridge plumage. The rump and tail are gray. The top of the wings and back are gray with brown feathers edged. The coat is a slightly lighter gray. The white feathers with black tips are visible in flight, like the tawny outer tail feathers. The beak is dark gray. Eyes are brown, surrounded by a small yellowish skin area. Legs and feet are dark yellow. The male has spurs on the posterior surface of the tarsus. On the head, the face, throat, the sides of the head and neck are white. The cap, ear covers and neck are gray. The female is slightly smaller and lighter than the male and has no spurs. Its forehead is light tan and the area around the eye is gray.

The Himalayan snowcock not often flies and generally prefer to walk or run.

It feeds mainly on plants. In winter, it forages on the slopes exposed to the sun and where the snow does not hold. It feeds by digging with its strong beak. Outside the breeding season, they gather in bands of 15 to 20 birds. It does not migrate but performs altitudinal movements to spend the winter at lower altitudes.

Laying usually takes place from late April to mid-May. The Himalayan snowcock is monogamous and the couple produces only one brood per year. The nest is on the ground, among tufts of grass and often in shelters. The female lays 6 to 12 eggs, about 8 in general. Incubation lasts 25 to 28 days.

There are five subspecies which differ in color tone.