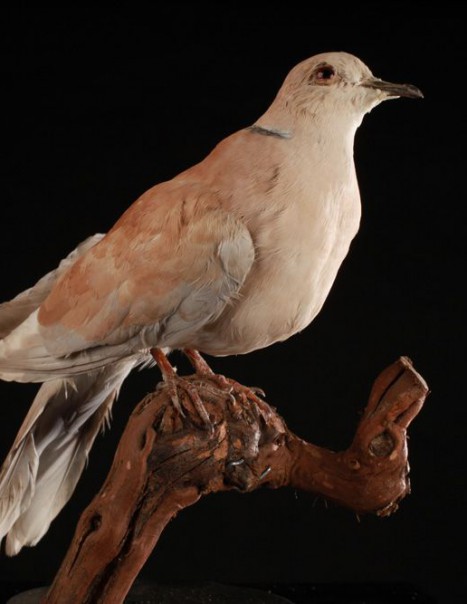 On the slender look, it looks like a small bird of prey which regularly earned it the wrath of the Songbirds. Its plumage is gray-sand on the wings, back and tail. The beak is black, short and fine. The eyes are red-brown and the legs and feet are pink. Both sexes are similar.

The dove lives in urban, rural, farms, groves, orchards, parks and gardens, near the grain stocks.

Native to India, Sri Lanka and Myanmar, it has yet migrated to Europe in the last century and its range extends continuously from the Arctic Circle to Scandinavia, the Bahamas, Florida, Texas and California .

It feeds on the ground, but also frequent the feeders in winter. They peck the berries on the bushes granivore it also consumes flowers, insects, buds they eat with relish. It drinks by suction and does not need to throw the head back to swallow.

It starts to breed early March until late October. The nest is a loose platform in a tree, hedge or dense bush. It is made of a few thin twigs and dry stems, very flat and small. It is very basic.
The female lays two white and smooth eggs. Incubation lasts about 14 days, by both parents. The chicks are altricial. The parents feed them with porridge seeds and young leave the nest after 18 to 19 days after birth. They can fly at the age of three weeks. The species can occur between 2 to 6 broods per year and longevity is estimated at 16 years.

The Turkish doves are common and widespread in their habitat.