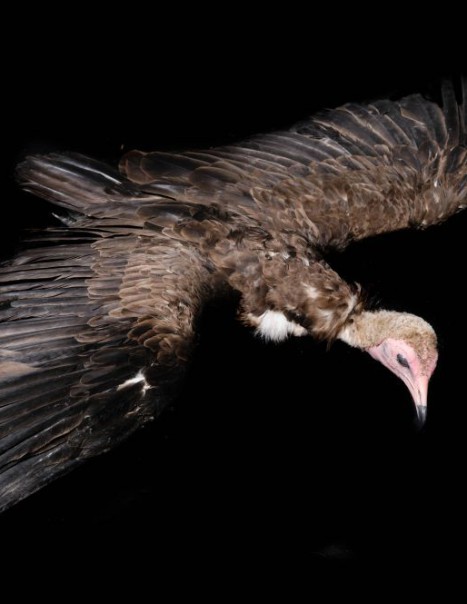 The hooded vulture is a species of birds of prey parts of the Accipitridae family. It is monotypic its kind.

This is one of the smallest of the old world vultures with a length of 70 cm and an average mass of 2.12 kg. It has a pink stripped head and a gray cap. It is fairly uniformly dark brown. It has broad wings to soar and short tail.

It feeds primarily on dead animals and waste he spots flying over the savanna and around human habitations, including landfills and slaughterhouses. It often moves in flocks and is very abundant. In a large part of its territory, there are always more visible in the sky at any time during the day.

It usually has no fear of humans and often meets around houses. It is sometimes referred as the garbage collector by locals. In some cultures it is forbidden to eat scavengers which vulture belongs.

Its nest is made of sticks placed in a tree, often a palm tree in much of Africa south of the Sahara. Laying includes one egg. The population is mostly sedentary. If it is disturbed when it is in its nest, it pushes a squeak.