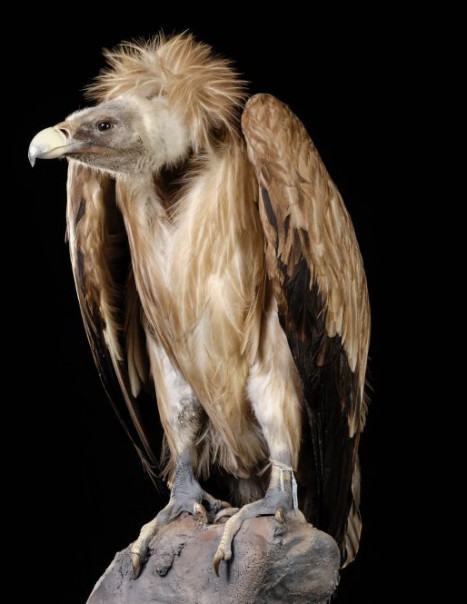 The griffon vulture is a scavenger bird of the family of Accipitridae.

Like most vultures of the genus Gyps, its long neck and head are not bare, despite the belief, but with a fine down, allowing them to search more effectively in the carcasses. Their beaks are very powerful allowing them to cut buffs carcasses. Their legs, unlike those of most other Accipitridae have no claws, since they have no use for hunting and are used only for perching and walking.

It is a glider, heavy and solid bird, it can travel hundreds of miles in search of food. Mainly scavengers, feeding on the carcasses of large animals it detects from the sky with its adapted vision, it feeds primarily on dead sheep, cows. Often, the ravens come first on carrion. These are excellent indicators for the vultures, because very fierce, they dare to approach prey when there is no more danger.

Griffon vulture live in a group. Colonies like to have, near their areas, resting places where large birds congregate. These surfaces are generally oriented to the south or southeast. They are located between 500 and 1000 meters in height and are often on cliffs to enjoy the drafts and rise without exhaustion.

Between November and January, the couples of griffon vultures are formed within the colony. The birds make two wide circles above the mountain, and will build a nest. The laying of a single egg hatching occurs each year in January or February. Incubation lasts 50 to 57 days. The young remain in the nest for four months. The adult brings its food that it must seek with an attitude of submission. It will make its first flight between July 15 and August 15.