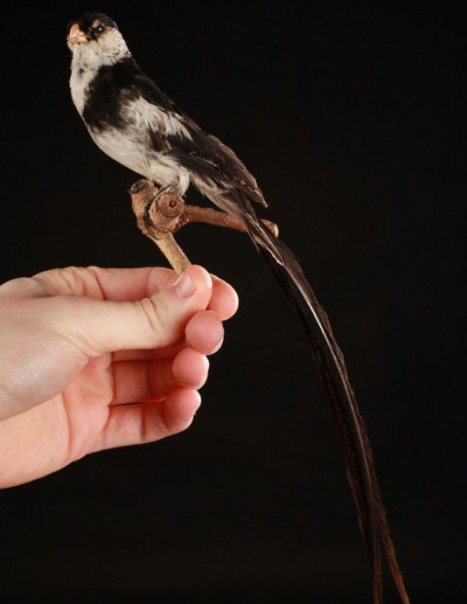 Pin-tailed Whydah – Vidua macroura
The pin-tailed whydah  is a common species and is the most widespread species of whydah. It is particularly prevalent in parts of Kenya, Uganda, Rwanda, Burundi, Tanzania but the area continues towards Southern Africa to South Africa. It is also found in Puerto Rico. It lives in a wide variety of landscapes: open woodlands, savannas, shrubs, bushes, cultivated areas, but also gardens. It attends altitudes of sea level to 3000 meters.

The pin-tailed whydah is 12 to 13 cm in length, although the breeding male’s tail adds another 20 cm to this. The adult male has a black back and crown, and a very long black tail. The wings are dark brown with white patches and the underparts and the head, apart from the crown, are white. The beak is bright red.

The female and non-breeding male have streaked brown upperparts, whitish underparts with buff flanks and a buff and black face pattern. They lack the long tail extension, but retain the red beak. Immature birds are like the female but plainer and with a greyish beak.

The male pin-tailed whydah is territorial and one male often has several females in its small group. It has an elaborate courtship flight display, which includes hovering over the female to display its tail. The song is given from a high perch and consists of rapid squeaking and churring.

The diet of this species consists of seeds and grain.