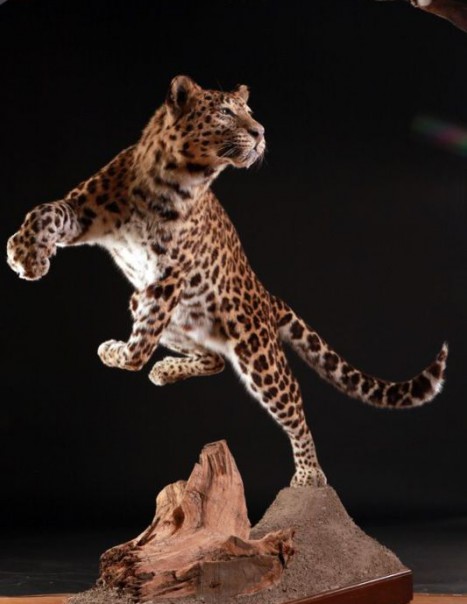 Also called The panther of Love or China panther, It is a subspecies of leopard native of the South region of Russia and Jilin Province in the north of China. It is classified as a species in critical danger of extinction.

It remains the world 50 wild nationals registered in 2012 and 200 individuals in captivity. It is like no other, the coat of the panthers of the  basin Amur river located in the mountains of northern China and the Korean Peninsula is cream, especially in winter. The rosettes flanks are 5 cm x 5 cm, they are thick and well spaced, circles are thicker and darker in the center.

Their coat is soft and their fur is long and thick. The length of the back hair ranges from 20 to 25 mm in summer and up to 50 mm in winter. Their winter coat varies from light yellow to yellow-brown golden colored. In summer its coat is shinier and rosettes are a brighter color. Amur Panthers are quite small and weigh on average between 35 and 48 kg . We find them where Sika deer live. In winter, they remain on non-snowy rocky slopes.

These Panthers are extremely conservative in their choice of territory, usually located in the basin of a river and extends to the natural boundaries of the zone. By sex, age and family size, the territory of an individual can be between 5000 and 30 000 ha. They can use the same paths, the same migration routes and sometimes sit in the same places. Where wild animals are abundant, they live there or permanent ways to migrate vertically, according to the ungulate herds and avoiding the snow.

Their main prey is deer, Sika deer, elk, and wild boar, hares, badgers, poultry and mice. They also hunt young Asian black bear younger than two years old. They are sexually mature between 2 and 3 years old and can reproduce until the age of 10 to 15 years. The heats last between 12 and 18 days, gestation lasts between 90 and 105 days. At birth, youngs weigh between 500 and 700 grams and open their eyes and crawl at the 10th day to the 15th day. They emerge from their dens in the second month and begins to eat meat. They continue parallel to feed with milk for five or six months and remain with their mother until it is again in heat. In captivity, some individuals have lived to 21 years.

Amur Panthers are threatened by poaching and encroachment of civilization. Tigers can eliminate the Panthers if the large and medium-sized prey density is low.