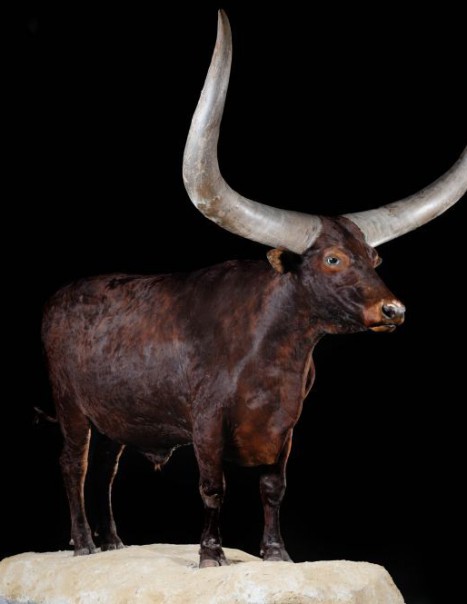 The Watusi is a domestic cattle in East Africa.

Its origin is mysterious, since it has no parent knowned, living or extinct in sub-Saharan Africa, it is assumed that it is a derivative of the Bos taurus indicus zébu, he would have kept the bump on the back, for some East African peoples, that beef is a sacred and respected animal.

He wears a red dress mahogany and even black, with some more or less large white spots. Red remains the dominant. It resembles morphologically speaking, to large varieties of Zebu, with a bump on the back. But his horns, arched, can be huge and exceed 2.5 meter long recorded in cattle. An adult weighs from 500 to 800 kilograms on average and measures 1.50 meter at the withers. It can live 25 years on average. Gestation lasts 280 days, range comprises only one smaller.

Despite its appearance of wild animal, it is actually quite docile and very sociable and lives in herds. This pet is at the base of the daily life and beliefs of many different peoples of Africa. Indeed, it provides many products such as milk, blood, leather, horns and even its dung which becomes a popular fuel in a country where forests are rare, while urine is used as a disinfectant.

Owning a herd of these animals is a sign of power and wealth, through its practical utility .This animal has a sacred value.