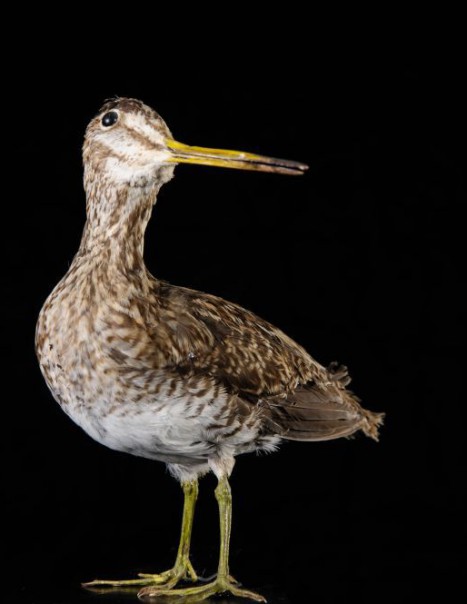 The common snipe is part of the scolopacidae family.

This species feeds usually in shallow water or near water.

The common snipe is a stocky bird wearing a cryptic plumage.

The adult has dark brown upper parts, marked with clear lines and streaks, buff, brown and black spots. The wings are dark brown with spots and clear and whitish brown edges. Flight feathers are dark brown with broad white tips, tail is brown with a thin white terminal line, chin and throat are white, the breast is tinged brown with darker streaks. The abdomen and belly are white. On the head, the cap is dark brown with very obvious light stripes. Cheeks and ear coverts are barred with dark brown, long beak is blackish with yellowish base. Legs and feet are yellow or grayish green. Both sexes are similar.

This species is migratory and frequents fresh or brackish water with vegetation, grassy or marshy lakes and rivers, wet meadows and marshy tundra. It requires moist soil, to enjoy the flooded meadows that give them abundant food resources and vegetation to hide.

Snipe is monogamous and nests on the ground. It breeds in Iceland, the Faroe Islands, northern Europe and Russia. It winters in southern Europe, Africa and Asia. It often feed at dawn and dusk in shallow waters. Female lays 4 olive-green eggs spotted with brown between April and June. Incubation lasts about 17 to 20 days, by the only female. Chicks practicing their first flight from 19 to 20 days after birth.

It feeds, usually in shallow water or near the water, on insects, larvae, worms, small crustaceans, snails and spiders. It also consumes seeds and plant fibers.

This species is not currently threatened.