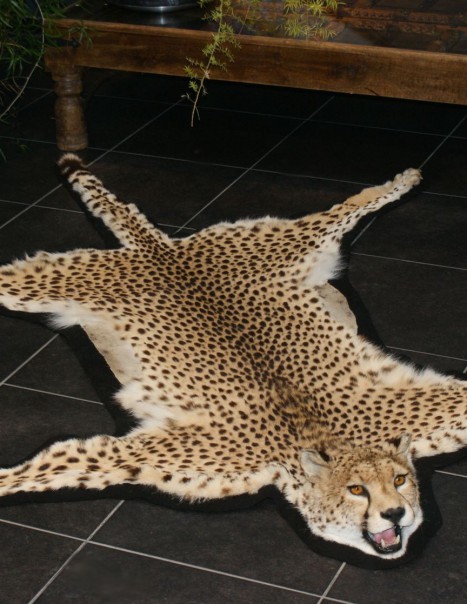 We realize many animal hides.

The most popular are zebra rugs  but we can also realize them with more rarer skins as tiger or cheetah.

Those carpets  can be made with or without felt.

The cheetah is a carnivorous mammal belonging to the family of Felidae. The cheetah is found mainly in eastern and southern Africa, home to the so-called species “king cheetah”, but also to the west, in the heart of the Sahel and the margins of the Sahara, although its presence is marginal in these places. There is also an Asian species but now almost extinct except in the Middle East, Iran.

Considered the fastest land animal with top speeds up to 115km/h, the cheetah is a sleek and slender animal.
Indeed, measuring between 1.10 and 1.50 m long and weighs between 55 and 70kg, cheetah turns out to be a cat with an anatomy that predisposes the race: long legs, deep chest, tail that serves as a balance and an unusually flexible spine. In addition, the cheetah appears to be the only feline with non-retractable claws, which ensures outstanding stability. On its fur, it is quite close to that of the panther as it is yellow and has black spots.

The mammalian order Carnivora, cheetah turns out to be an excellent hunter of gazelles and antelopes, which are its main meal. Nevertheless, this svelte feline will not disdain, from time to time, to add to its menu hares or even wildebeest calves. Unlike other cats who prefer the alert, cheetah loves hunting in daylight, helped by its spotted coat and black eaves lining her eyes which give it an effective camouflage in the grasses of the savanna.

The cheetah lives and hunts in the lightly wooded African savanna on a territory extended from 50 to 150 km². It is also in this territory that the cheetah gives birth to her babies after a gestation period which lasts 90 or 95 days. The number of three or four, small cheetah , called kittens are pampered by
their mother but barely one in three manages to adulthood for a maximum life expectancy of twenty.

Unfortunately, the cheetah is now an animal considered vulnerable by IUCN, which provides a high risk of extinction in the wild and in medium term.