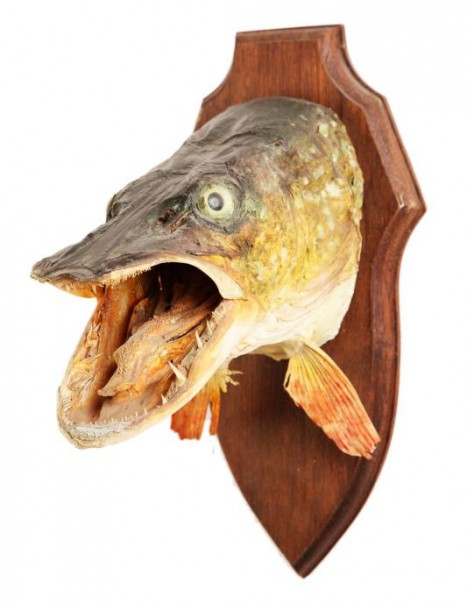 Pike – Esox lucius
The pike is a fish that inhabits the rivers, lakes and ponds in Europe, North America, Asia and Morocco. It is present over the entire band of the globe between the Tropic of Capricorn and the Arctic Circle. It is now recognized as an excellent population control of lakes and ponds, playing a vital role and a health natural selection by eliminating diseased, deformed, injured fishes, quickly replaced in their ecological niche then left free. It is only partially protected title. It is often introduced into the water where the carp are redundant.

Pike are fusiform and covered with fine scales, with differences according to their environment. The sides and back are usually green or yellow. Its size varies from 30 to 110 cm and its weight between 2 and 10 kg.

In pike, 5 sensory pores are visible under its lower mandibles. Adult likes the slow flowing rivers, oxbow lakes and ponds while younger prefer fast flowing where they find food. It defends its territory against any intrusion.

Exclusively freshwater species, pike also fish in salt waters of the Baltic Sea. It is a sedentary and solitary hunter. In large lakes, it is also found in shoals, especially when it comes to young. Pike can live more than 20 years and it does not like the dark. It prefers light and often ventures border.

The pike diet changes with age. It begins by feeding on zooplankton and insects, as adults, they eat fish, bream, perch, trout and even pike, crayfish, frogs, ducklings chickens water, rodents. Cannibalism is not uncommon in pike. Pike is an opportunistic carnivore that feeds on whatever is easiest to catch. The size of prey can be as large as one-third to half its own size.

This is a fish that hunt in ambush; it hides in aquatic weeds or merges with submerged branches and waits for prey to pass within range. It slender body is not suited to long proceedings but to sudden and straight acceleration. It is not rare that it attacks a fish caught by an angler line.

Unfortunately, in some places in the world, pike is threatened with extinction by changing its habitat.