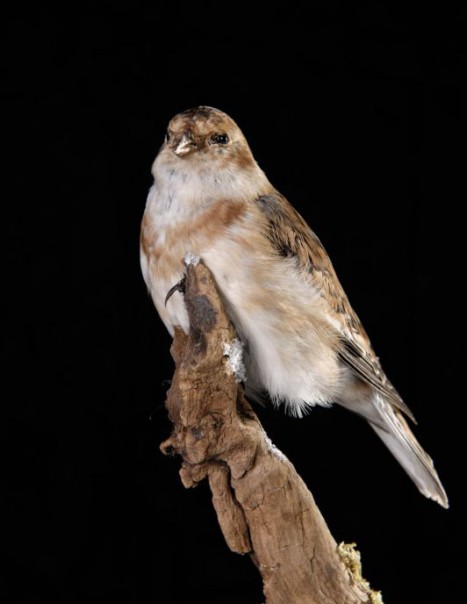 This passeriformes is from the family of Calcariidae.

Northern species wintering regularly in France. The importance of the white plumage strikes first when an observation of bunting. The male, in winter, has the neck, the throat, part of the wings, the bottom of the chest and the abdomen white, part of the chest and cheeks are wild, the uppermost line is brown, chamois back is marked with dark vertical stripes, black primary feathers with white borders, secondaries in brown and white trim, black tail is lined with yellow and white. The female is less colorful plumage and has a dirty white.

Snow bunting is easy to identify. Confusion would however be possible with niverolle snow but the two species do not share the same range or the same habitats. A population occupies Iceland, another population is migratory and inhabits Greenland, Scandinavia, Russia and Spitsbergen.

Snow bunting winter comes more to the south in Central and Western Europe. The preferred habitat of this bunting is made up of rocky environments: rocky coastline and mountainous areas. It also likes the tundra dotted with rocks. It spent the winter months on British shores, French, Scandinavian but also in the great plains of Eastern Europe.

Its melodious song consists of a refrain linked note issued quickly. Sing it often in flight when traveling over.

Its nest is built on the ground in a rocky concavity or between stones from plant material, leaves, mosses, lichens. The bottom is lined with wool and feathers. The female lays an annual laying from 4 to 6 eggs that she incubates alone for 12 to 13 days. It eats seeds and insects. The grass seeds are preferred but also those of heather and shrubs.

Its life expectancy is estimated at 8 years.