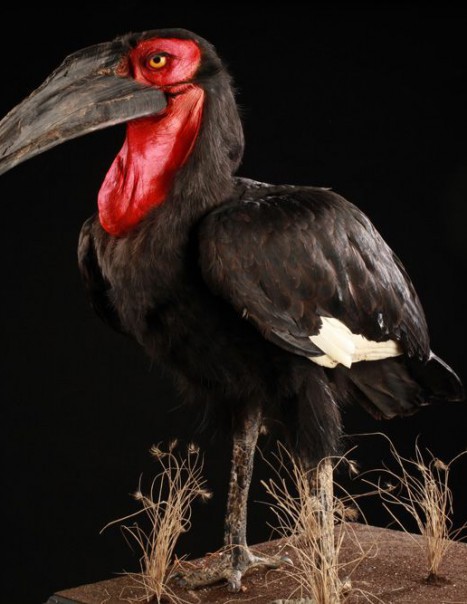 The Southern Ground Hornbill is a species of bird belonging to the family of Bucorvidae.

It is a large bird, from 90 to 129 cm long, weighing 2.2 to 6.2 kg, the male is considerably larger than the female. Its plumage is characterized black, it has bright red spots on the bare skin of its face and for the young, the throat is yellow. The white tips of its wings are seen in flight, is another feature of identification. Its beak is black and straight, it has a headphone more developed in males. The female is smaller and the skin of its throat is blue-violet.

It is found in northern Namibia, Angola, north of South Africa, Burundi and Kenya in savannas, forests and grasslands. This is a vulnerable species, mostly confined to reserves and national parks. They live on the ground where they feed on reptiles, frogs, snails, insects and mammals up to the size of hares.

It lives in groups of 5 to 10 individuals adult and young. Young adults are dependant until 6 to 12 months.