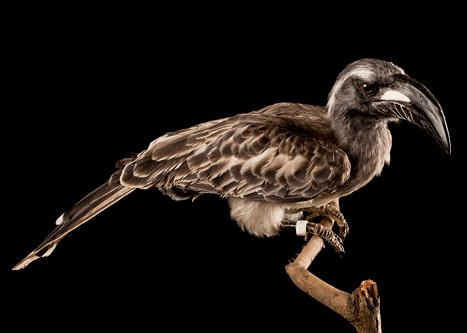 The Malabar grey hornbill is a hornbill endemic to the Western Ghats and associated hills of southern India.
Its plumage is gray, black and white. The adult male has a spout and slightly protruding yellow-orange helmet. The bare skin covering the circumference of the eye and throat is black. The iris is reddish brown. The Malabar grey hornbill differs from that of Gingi by the color of its slightly lighter plumage, its more prominent eyebrow and its gray chest.
Females are smaller than males and juveniles resemble it. They live in evergreen trees and deciduous forests along streams and in areas of rolling hills, over 600 meters, in the lowlands, plantations and gardens. It hardly penetrates into the interior of the land and seems limited by the line formed by the hills.Throughout the year, it remains in small groups, moving in swift flight. When foraging, groups tend to be more around fruit trees when resources are abundant. They nest from January to May, at the end of the dry season. The nest is placed in the cavity of a large tree located in the forest, with an average height of 16 meters and nest measures about 25 cm wide.

Laying has between 2 and 4 eggs. The male brings fruit by regurgitating them one by one. If it provides insects, it keeps it at the tip of the beak. Incubation lasts 40 days. The flight takes place 46 days after hatching, a total of almost three months for the entire reproductive cycle. The female and chicks emerge throughout the cavity.