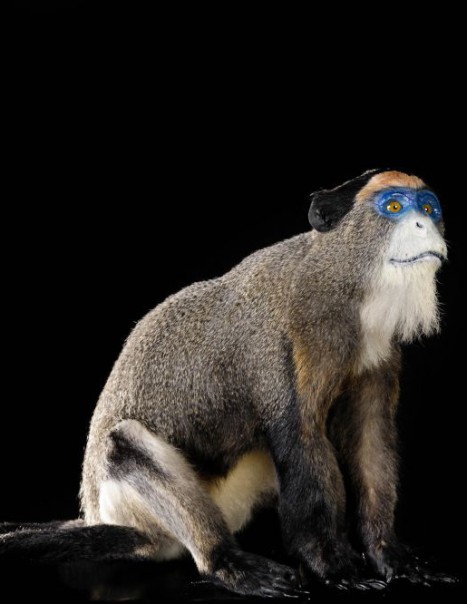 The De brazza’s monkey is a mammal of the order primates and Cercopithecidae family.
Known locally as the monkey swamp, they are often found in wetlands in Central Africa. It is very difficult to observe because of its strong ability to camouflage and so there is no exact count of the species.

They have a harmonious body and longer hind legs than the forelegs. Their round head is often adorned with a tuft of hair of varying color. Their size and weight vary by species, 35 centimeters for the body (35 cm tail) and 1.3 kg .

Living often in dense forests, they are very communicative, they frequently emit shrill cries through their gular sac that serves as a sounding board. Their view is excellent, they communicate through gestures or facial expressions. Some species swim willingly. Medium sized monkey, a slender body and long prehensile tail. The monkey has a gray coat with a reddish-brown back, black limbs and tail and a white rump. A narrow white stripe short on its thigh and a marking orange crescent appears on its forehead. Its eyelids are as white as its nose and beard. Both sexes have cheek pouches in which they carry food while they forage. Males have a blue scrotum.

Daytime, the monkeys live in small family groups of about ten people.

Omnivores, they feed on leaves, fruits, gums but also insects, lizards or small mammals and birds.

There is no defined breeding season. After five to six months of gestation, is born a baby, furry and eyes open. It will be breastfed for four to five months. The interval between births is one to three years.

Their life expectancy is twenty to thirty years depending on the species.