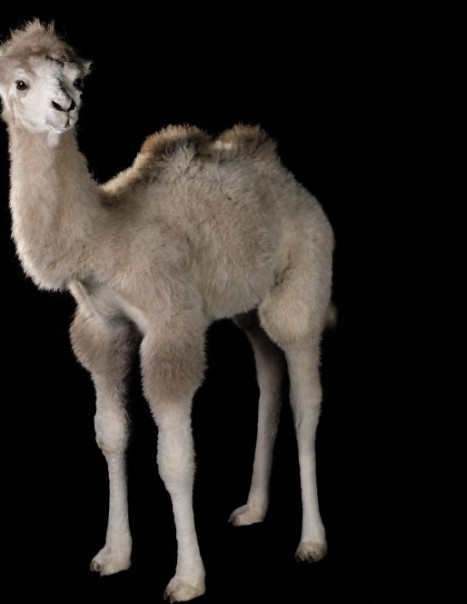 Camels are mammals of the Camelidae family.

The first two species hybridize, and young, is known as the little camel, the Turcoman.

The average life expectancy of a camel is 60 to 70 years.

An adult camel can measure up to 1.85 meters at the shoulder and 2.00 m at the bumps. The bumps are approximately 75 cm from his body. Camels are not very quick in the race unlike dromedaries, they can run up to 20 km / h maximum for short periods and at a speed of up to 10 km / h. The camel is smaller, less muscular and stockier than its dromedary cousin. For some experts, Bactrian camel descended from species with two humps. The embryo indeed has two humps and the adult has a rudimentary anterior hump.

The camel is still present in the wild in the Gobi Desert. The female weighs up to 600 kg and the male more than 800 kg. Wither height varies between 1.80 and 2.30 m. Like the giraffe and bear, the camel move forward by raising both legs on the same side. Bumps camels are energy reserves, full of fat. It has an adaptation to dehydration. It can drink up to 135 liters of water in 10 minutes by sucking through its  lips, which can take the form of a suction cup. In a state of dehydration, the animal is able to conserve body water by mechanisms to reduce water loss. Excreta disposal requires large quantities of water

The digestive tract is slower and having the ability to separate the solid and liquid phases in his stomach, it can increase the digestibility of low quality forages. This allows it to withstand long periods of about one month without drinking and without eating under very hot or very cold climates. The camel can withstand hot temperatures in the summer and 50 degrees to -25 degrees in the winter. Its thick fur provides the protection against the cold and the hairs fall by large clumps in spring, when the animal moved. This great weather resistance makes valuable use for the transport of men and goods that can travel 60 km a day.

The camels seem to come from Asia. The largest populations are in descending order in Somalia, Sudan, Mauritania, India and Ethiopia.