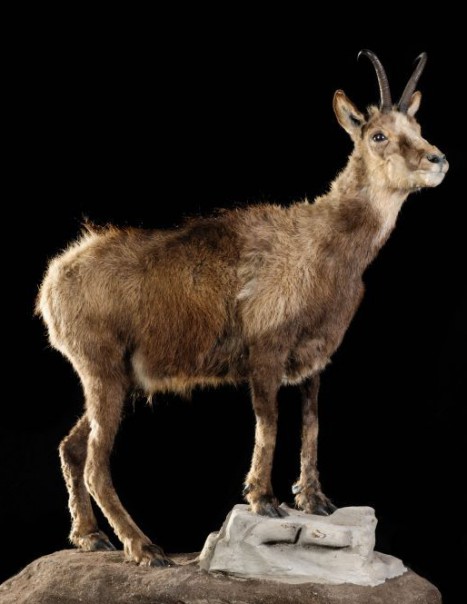 The Pyrean Chamois is a mammal of the bovidae family, belonging to the order Artiodactyla.

This animal, similar to ibex, is found both in the French Alps and in Azerbaijan. It is also possible to find in the Vosges, the Jura, the Carpathians and the Balkans.

The chamois measure between 120 and 130 cm. Adults weigh between 35 and 60 kg, the female always being more slender than the male. The weight of this animal varies with the seasons. During the fall, the mammal displays its maximum weight because of accumulated reserves. This stoutness is halved at the end of winter.

The general appearance of this representative Caprinae is much like that of a goat. It is characterized by its slender neck and thin horns. A black band separates its white cheeks from ear to nose. Overall, the fur of the chamois is light reddish brown and turns black brown in the winter. Also called the dorsal mane beard is a characteristic feature of the male chamois. The sight of a chamois allows it to detect a movement performed at almost 500 meters. This  sharpened view is required to detect a predator, however, it does not allow it to be completely safe since it is unable to identify stationary even if they are located near it.

Hearing of this mammal enables it to recognize the sounds related to human activities of those who predict danger. There is also a sense of smell that helps locate a intruders half a mile away.

The chamois breeding season begins in mid-November to early December. These animals reach sexual maturity at one and a half year, but they do not occur at the age of 3. After a gestation of 23 weeks, the female chamois gives birth to a baby. This will be weaned at about 6 months. Life expectancy reaches more than 20 years in captivity but it does not exceed 10 years in the wild.