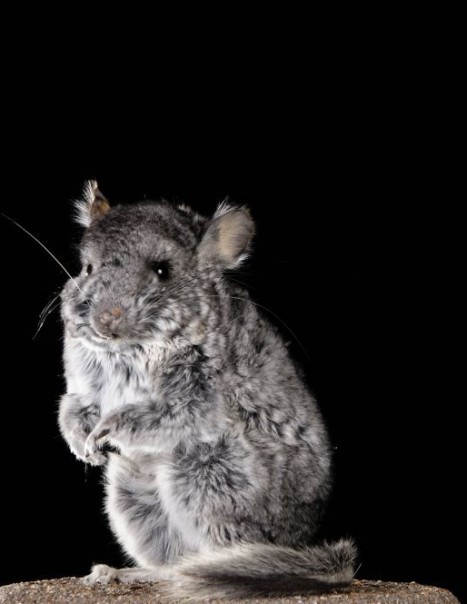 Chinchilla belongs to the family of chinchillés. They are mammals belonging to the order of rodents.

They are from Latin America and especially from the Andes.

Current chinchillas are hybrids of two wild species Chinchilla laniger and Chinchilla brevicauda, but it remains closer to the laniger Chinchilla.

In adulthood, they can reach between 400 (for smaller males) to 600 grams. The body length is 25 to 30 cm and the length of the tail is 7 to 15 cm. The chinchilla has 5 fingers on forelegs and 4 fingers on hindlegs.

The chinchilla is a herbivore. It therefore has consequently need a lot of fiber in its diet, hence the importance of hay and the use of pellets. Chinchillas are very sensitive to above 24 ° C. They could be in danger, they often need to drink.

Regarding reproduction, they reach sexual maturity at 5 months for males and 4 months for females. They are reproductive from 8 months. The breeding season is from November to May and the duration of gestation is from 110 to 112 days. The number of babies ranges between 1 to 4 with an average of 2. The cycle of the female lasts 30 to 50 days, polyoestrien. The heats strictly speaking last 31 days on average, but it is very variable. Ovulation is spontaneous in the female chinchilla.

The chinchilla lives the night but it gradually accommodates to the life of its masters. It is an agile rodent that loves to climb. It will avoid putting two males in the same cage, because of the risk of fighting. Chinchilla, very sweet, loves hugs. To take a chinchilla, we must keep one hand at shoulder height, with the front legs, and the other hand supporting the rump. It can also be entered by the base of the tail. Avoid sudden or you could get bitten.