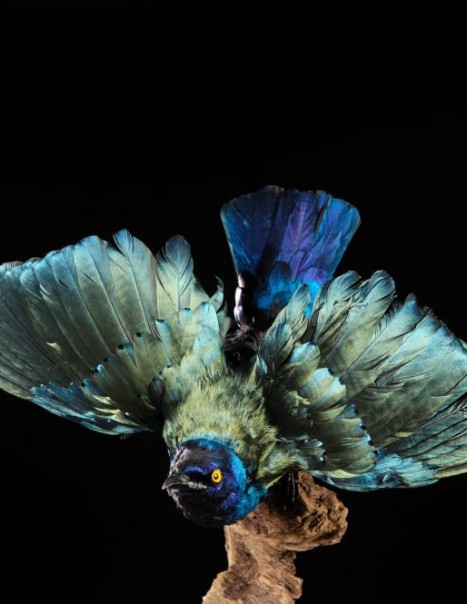 The greater blue-eared starling belongs to the order of Passeriformes and the family of Sturnidae.

In adults, the front, the hood, the neck, the mantle, the back are blue-green, with blue reflections on the above-coverts that also have dark spots near the ends. Lores are black, mumps brilliant blue forming a visible spot below the eyes. Chin, throat, chest and feathers are blue-green iridescent causing a slight contrast to the flanks, thighs, belly and underside of the wings are blue with a purple hue. The wings are blue-green but the primary coverts are bluish. A purple-bronze shoulder adorned the upper edge of the wing. Irises including yellow or orange, legs and beak are black. The sexes are identical.
Youngs are duller than their parents. The irises are reddish brown with a gray outer ring.

The starling’s cry is very characteristic. The bands sing in chorus from their perches in trees.

This bird frequent tropical regions mainly open woodlands. In West Africa, especially in Mali, near deserts. In contrast, in Kenya, the Blue-eared starling avoids arid regions of the northeast and nests in mountainous areas above 1500 meters, the surface is watered by more than 500 mm of annual rainfall.

The nesting season occurs at different times depending on regions. It would be too tedious to mention all regions.

They eat figs in large numbers, but they are looking for grasshoppers, beetles and seeds. In Ethiopia, the menu consists of a mix of fruits and insects. In Kenya, they collect nectar on agaves. In the same country, they climb on the backs of Cape buffalo, blue wildebeest and Burchell’s zebra to get rid of their parasites. On the other hand, they do not consume any mammal. In Eritrea, these birds are fond of locusts and winged termites after they capture an aerial pursuit.