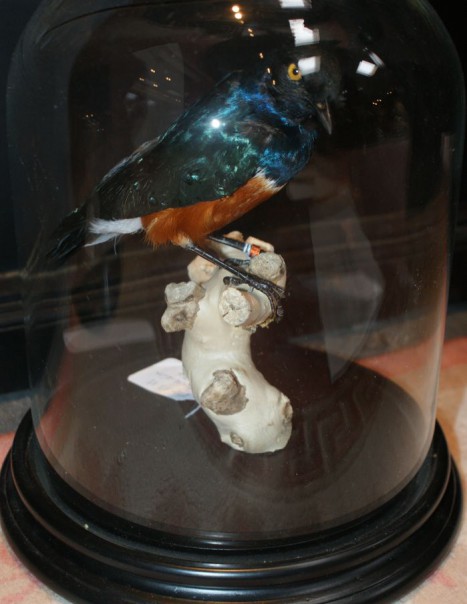 Its old name was Royal Starling, this species is from the family of sparrows.

It lives in grasslands and savannas of northeastern Africa, Somalia, Ethiopia, Kenya and Tanzania.

The adult has a metallic green head and upper back, bright golden yellow breast and belly, dark bill and legs, white iris and metallic violet blue on wings, back, neck and its long tail feathers. Both sexes are similar. The young are duller than the adult.

The golden-breasted starling is a social animal, living in groups of 3 to 12 individuals. It molts once a year, after the breeding season.

The female usually lays 3 to 5 pale green eggs with red speckles. It nests in tree holes. The nest is made from leaves, roots and other vegetation. Entire family groups cooperate in raising young by gathering food and nesting materials.

Its diet consists mainly of insects and termites. Adult birds catch insects in flight and dig up termite mounds to find prey.

Widespread throughout its habitat range, the golden-breasted starling is evaluated as being of least concern.