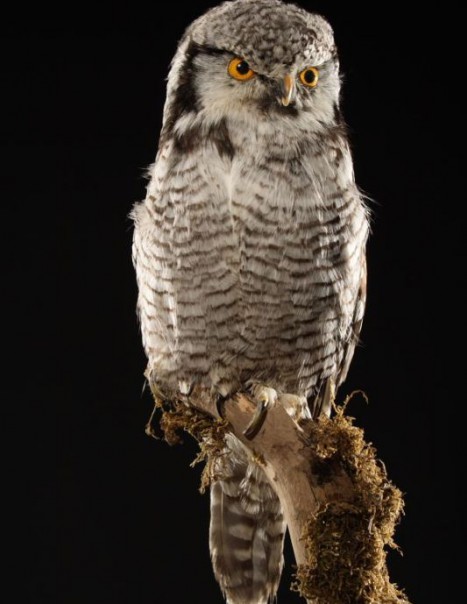 The Northern hawk-owl belongs to the family of owls. The origin of its name comes from the fact that it has the silhouette of a hawk. Although it s part of the the family of nacturnal owls, the northern hawk-owl hunts mainly during the day. From the order of carnivores, it feeds on small rodents, birds in the great plains, fields, open areas. It lives in boreal forests of Eurasia and North America, in sites provided hollow trunk to deposit the eggs.

Incubation lasts between 25 and 30 days and it is in mid-March, after the nuptial flight of the males, which is done before the snow melts, that the hawk-owl moves to lay between 3 and 10 eggs, with one or two day intervals. Fed by the male, it will fester for two weeks.
Food resources, determine the number of eggs laid. It is known sedentary, but depending on the food, though it is rare, the hawk-owl, is able to travel long distances.

When it moves, flying fairly close to the ground, sometimes performing, stationary flights can be observed, this means that it is hungry. Otherwise, it remains hidden in tree cavities.

With any luck, it can be seen on telegraph poles because it likes to get high. Able to capture prey in flight, it is with keen eyesight and acute hearing, it detects its food before befall it.

Medium in size, with a proportional tail to the body, its white color, barred with dark brown, below the body, and its brown-black head, giving it a majestic look. The female is slightly larger than the male and pushes a sharp and softer cry.

Although it adapts perfectly to different environments during reproduction, it is particularly sensitive to human presence.
For the hawk-owl, a species classified uncommon in the European Union, deforestation results in a lack of hollow for nests that can be detrimental to the survival of the species.