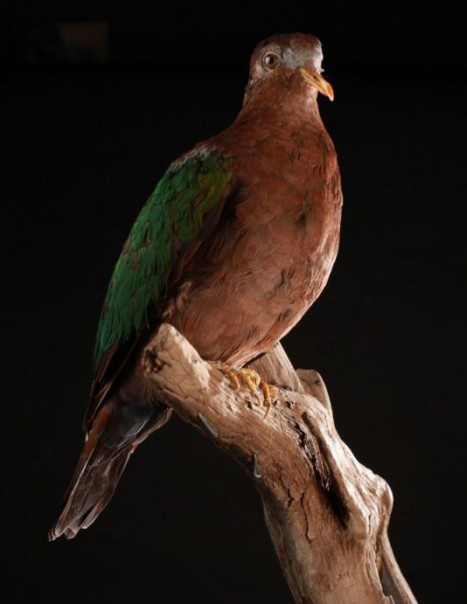 In the adult male, forehead and brows are white, building gradually into the dark blue-gray cap and nape. The neck and upper mantle are gloss burgundy with vague infiltration of blue-gray. The coat, wing coverts, tertiary and secondary internal threads are metallic green, often with bronzed sheen.

Black back with a slight greenish luster is crossed by two thin pale gray bars. The female is generally buff-orange on the neck and underparts. Forehead and eyebrow are often infiltrated with gray. Young have pale buff forehead barred with dark gray.

It attends primary rainforest, woodland edges and arid areas in the brush generated by the monsoons, mangroves, gallery forests, rubber plantations and coconut trees overgrown in the gardens on the outskirts of cities.
It is a bird of lowland areas, which does not prevent it from living from sea level up to 1800 meters in the Himalayas and up to 1300 meters in New Guinea.

They are native of Asia, Australia and the Himalayas of Kashmir, Burma, Thailand, Indochina, the Malay Peninsula and large Sunda Islands. It includes Taiwan, the Philippines, the Moluccas, Sulawesi, east of New Guinea, it covers the entire Indian peninsula to Sri Lanka and continues in southern China to Hainan.

The Bridal activity takes place every month of the year, the nesting occurs mainly from March to May and October to March by region. The nest is built of twigs. It is placed in the thick foliage of a bush, a creeper or tree pandanus type, in a clump of bamboo, a tree fern, in a clump of epiphytes, between 1 and 11 meters above the ground. The female lays two eggs which are incubated by both parents to turn for about 14 to 16 days. The two partners work together to care for the brood.

Vegetarian, they eat mostly seeds and fruits, berries, shellfish, insects, larvae and worms. Although they are not very followers of this way of eating, they gather sometimes directly fruits and berries on the branches of bushes and trees.

The species is classified as Least Concern.