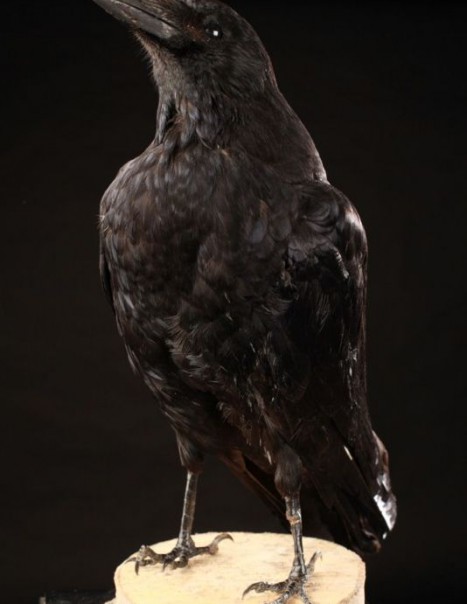 Bird entirely black, including the legs and beak. Its beak is more slender than the raven and the feathers of its neck are not ruffled. The tip of its tail is square. It is distinguished by its raven rook larger beak, which is not white. The sexes are similar.

The maximum age of the black crow appears to be about 20 years. Its voice is very unpleasant in its tone and because of repetition. They love to explore the countryside with groves scattered trees, heath, arid areas, roadsides and roads, rocky edges, coastal cliffs, beaches, estuaries, rivers and river mouths lagoons. It is very territorial. In early summer, at dusk, the crows use to gather in band to forage in small groups.

The couples live scattered and separated, the presence of terrestrial predators or prey sees all couples an area meet in the treetops in shrieking. The parade of the male consists of a series of “salutes”, his flight is rather slow. Its almost never flat, content to remain at low altitude.

The nest is built by both parents. It is a bulky nest, made of branches in a tree or on a cliff. Male brings materials but remains outside, while the female arranges inside. They can find everything from grass, dry leaves, sheep wool, hair, bristles, paper, rags, plastic, roots, feathers.

Laying occurs from April to May. The female lays 3 to 5 blue eggs. Incubation lasts about 19 days, by the female. Young, fed by both parents, fly after 35 days. Couples mate for life. Young are similar to parents. They stay with them several weeks after leaving the nest. Their diet is varied including carrion, invertebrates, seeds and fruits. It can plunder the nests of other birds.