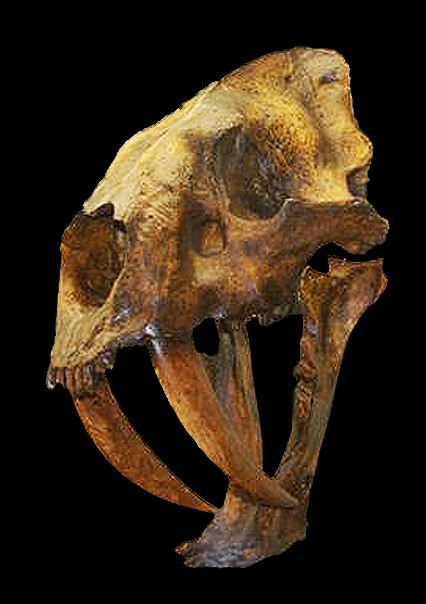 Aslo known as saber-toothed cat, the smilodon belongs to the family of Felidae. This kind of cats  have lived in America during the past 40 million years. It was one of the most iconic “Ice Age” mammals in North America.

Three species of Smilodons are recognized

The name of this animal comes from ancient Greek. The smilodon had a size comparable of a lion, its tail was still short and claws, like most big cats, were long and retractile. The smilodon is characterized by its long upper canine teeth emerge before the lower jaw. It weighed around 55 to 450 kg, was about 2.5 to 4 meters and could open its mouth to 120°.

The smilodon would have been a super predator. According to its morphology, its muscle mass and jaw, it hunted large mammals, bison equine and camels. We know that it was also a scavenger because many fossils have been found. It could eat up to 8 kg of meat per day. Its absence tail whose cats use to balance their race and morphology suggest that it could not run a long time and should therefore approach its prey by surprise.

The smilodon was not the largest North American predator of the Ice age. The short-faced bear – Arctodus simus – was one of the largest predators of the time.  Another of its competitors was the giant predatory bird, Phorusrhacos longissimus, probably ate the carcasses left by Smilodon.