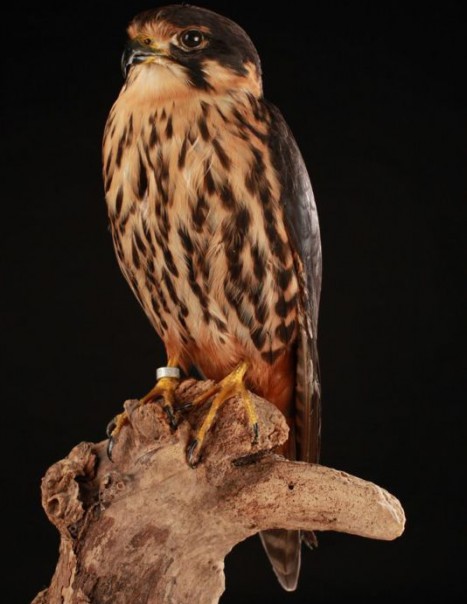 The Eurasian Hobby is a small slim falcon.

Its blue beak is short and bent from the base. Of slate gray and blackish brown color, with on the neck, a narrow white band scattered on the edges and red spikes of some feathers. The central tail feathers are barred with brown. Mustache contrast cheeks and white throat. Legs and feet are yellow. Both sexes are almost similar, the female is slightly larger than the male. Young have their adult plumage during the third year.

Its preferred habitat is constituted by the edges of woods or copses in wetlands. The open land, moorland and farmland with trees. This is a very discreet and very mobile prey. This migrant is back in April of its South African winter quarters in savanna. Post-breeding migration begins in August, culminating in September. The latter can be observed in October.

The Hobby falcon feeds on small birds, swallows and swifts, large insects, dragonflies and kites caught in flight. Small mammals are also part of its regime.

It is more active foggy days and dusk. From the first days of June, the falcon has chosen a nest, a former nest corvid, nozzle or hawk. It never builts a nest. It digs and scrapes a hollow where the female will deposit eggs. Incubation lasts about 28 days, by female. It is fed by the male who brings prey, sometimes to the nest, but also the usual couple perch. Chicks hatch at two days intervals. Young chicks can feed themselves at 18 to 20 days with prey deposited in the nest by the parents. They leave the nest at the age of 28 to 31 days, and fly well enough, but they are still around, still fed by adults.
The family group remains together for 20 to 30 days before leaving the area to mid-September.

This hawk has a lifespan estimated at 11 years.