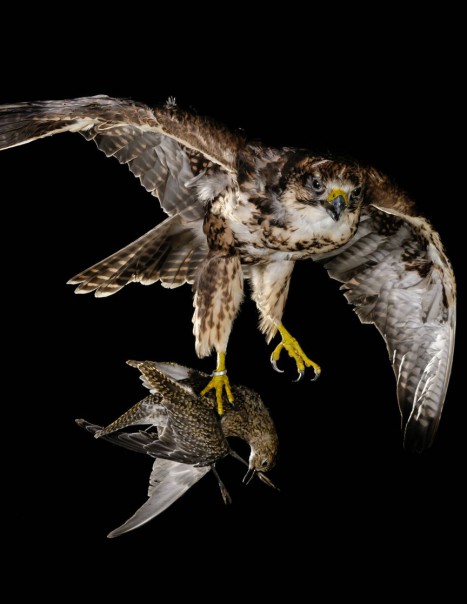 The saker falcon is a bird of prey in the order Falconiformes, family of Falconidae.It is speckled light, it sports a pen cap on its head and a little mustache leave from its short and curled beak. It is 50 cm high, scale ranges from 105 to 130 cm.

In 20 years, the species has lost 60% of its population. Its conservation status indicates that the species is endangered. Saker falcon is protected by the European Directive EEC 79/409 / April 22, 1979 and listed in Annex I of the COP10 (Conference of Parties) CMS (Convention of Migratory Species).

The Saker Falcon is present in Eastern Europe, Central Asia, China and the Himalayas, up to 5000 m above sea level, in Arabia, Ethiopia and Italy.
Trained in falconry in the Arab countries and Asia.

Its habitat, humid plains, steppes, forests, varies depending on its prey. Saker falcon Russian is migratory, to the Middle East in winter, others are sedentary.I
t feeds on lemmings, voles, moles, sousliks, larks, herons, pigeons and partridges.

From March to April, adults over three years, lay ,in a rock or in a tree cavity, 4 or 5 eggs without building nests. The only female incubates for 28 to 30 days. Young keep the nest 40 to 50 days, and then 50 days later emancipate. The longevity of the Saker Falcon is 22 years

Mongolia is authorized to collect sacred hawks, to build 5.000 artificial nests for the preservation of the species.
Reproduction of Champions falconry results in very high-level negotiations, in which all stakeholders, including assisted reproductive specialists are largely paid according to their results.

The falconer hunting is recognized world cultural heritage by UNESCO.