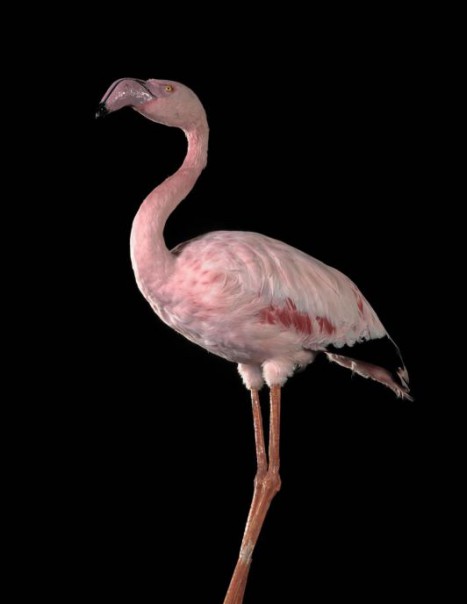 The lesser flamingo is the smallest flamingos, It does not measure more than a meter unlike other flamingos that reach the meter and a half. Its wingspan is all over 1m20 and weighs only 2.5 kg.

Like all other flamingos, it is pink. Only some back feathers are a darker pink than others. Long legs are of the same color as the rest of the body.
Only its beak is a very dark red with a hint of black at its tip and the tip of its wings is also black. Young flamingos are gray or white.

The lesser flamingo filter the water and mud with its curved beak. It feeds on algae, insects and crustaceans. But during the breeding period, it feeds exclusively a bacterium it found in lakes with very specific conditions. It contains a very high salt concentration that allows the development of the bacteria called Spirulina.

Like all other flamingos, they live in colonies and build their nests with mud surrounding the water points they attend.
Nests are built on the ground, but in height, it prevents that it makes overwhelmed by small waves. The female lays a single egg that will hatch alternating with the male for four weeks.
The chick after hatching, is gray and has a straight beak. As it is straight, the bird can not filter the water and mud to feed. So its parents that feed by regurgitating what they ate. It is at the age of twelve weeks they take flight.

Lesser Flamingo can be observed in Africa but also in Asia. Each breeding season, they frequent the salt lakes of South Africa and the East.

The lesser flamingo is not considered endangered, but they frequent the lakes fragile and unprotected. The less pollution would be catastrophic. This balance could collapse at any time and lesser flamingo would be in danger.