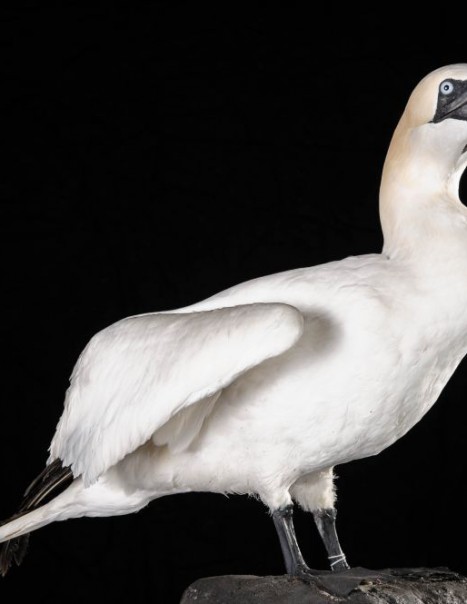 Adult has white plumage on the whole body except the head and wing tips. The long pointed wings have at the end a dark spot in the shape of a triangle. White tail is pointed. The head and neck are yellowish buff, sounding more lively in the male. These colors become paler in late summer and autumn.
It measures between 90 to 100 cm and weighing 2.5 to 3.5 kg. The long pointed beak is pale blue. The eyes are white, surrounded by a pale blue eye ring and also a black line. Lores are black. Legs and webbed feet are black. Both adults are similar. Juvenile is dark brown mottled white, with white rump. It needs about four years to get the full adult plumage. The chick is covered with a thick white down, with black eyes and beak. Both partners practicing beak to beak and shake their heads to communicate.
Longevity of life varies between 25 years in the wild, sometimes up to 40 years in captivity.
It is very noisy when feeding in large flocks. Male and female launching discordant sounds during the displays, especially when the birds flies up to the sky.
It breeds on both sides of the North Atlantic. This species winters further south and young birds sometimes go to the equator. It nests on sea cliffs, especially on rocky islets and small islands, and sometimes, but rarely on the mainland coasts.
It feeds mainly on fish, usually herring, mackerel, sprat and sandeel. This species is well known for its amazing dives often made from a considerable height, between 10 and 30 meters, they often feed in groups. Diving is truly spectacular. When the fish shoal is detected, the bird adjusts its direction and takes a stand with wide-open wings above water. Then it goes down and towards the end of the dive, it folds its wings so that they are parallel to the body. And finally, it pushes violently backward to enter the water like an arrow.

Northern Gannet performs courtship, often using ritual postures. The most traditional parade is the one that shows the bird with beak pointed skyward. These parades are sort of warning signals given to other birds to defend small nesting sites and the territory of each.

Pair bonds last a lifetime and each couple usually returns to the same nesting site year after year. Breeding season occurs in March and April. The female lays a single oval egg with a size of about 8 x 5 mm. Incubation by both parents lasts about 44 days. It nests in huge colonies on sea cliffs. After the breeding season, adult disperse and move south for the winter. In contrast, young birds migrate south to a greater extent than their parents.

Gannet should be able to fly all year for food and this form of moult avoids long periods of disability in flight. At birth, the chick is almost naked and its parents warm it during the first days. Later, its body with black skin is covered with a white blanket. They leave the nest at the age of three months. They reach their sexual maturity at 4 or 5 years. Both parents feed the chick who takes food directly in their mouth or even in their throat. This species produces only one brood per year.