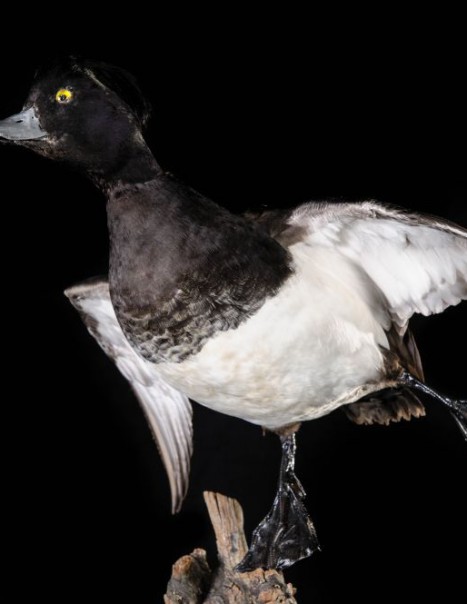 The Tufted duck is a small diving duck with a population of close to one million birds.

Sexual dimorphism is existing. The overall male is black, except the sides and belly are white, the webbed feet are gray. The female has a brown plumage above and light brown. In flight, both sexes show a white wing bar.

It frequents ponds, lakes, slow streams and rivers. In winter, it grows incursions into the cities where it is found primarily in large parts of water parks or near the bridges over waterways. Freshwater duck, tufted duck is rarely seen at sea, except during migrations.

Present in the temperate regions of Eurasia, it is sedentary in Western Europe only. Moreover, it is migratory, wintering and nesting to Lapland to Ethiopia.

This diving duck finds most of its food beneath the surface. Immersion usually lasts between 10 and 20 seconds. Powered by its large webbed feet, it can drop to 7 meters deep. It is sociable, even during reproduction. The nest is often close to that of gulls and terns. It is a partial migrant.
The usual nesting lies more in the north and center of Europe, the British Isles, Iceland, Scandinavia. They overwinter in our countries, in Europe, North Africa and even south of the Sahara. This change partners every year. Pairs form in late winter or early spring. There is no set rule, some birds mate before migration.

The nest is a small platform of grass and reeds filled with down near the water, on land in the herbaceous vegetation. In May-June, the female lays from June to November eggs with incubation lasts between 23 and 28 days. It occupies only eggs and covered with a layer of insulation down when absent from the nest.

Soaring ducklings occurs after 40 to 45 days after hatching. There is only one egg per year. Scaup reaches sexual maturity after one or two years.

Their lifespan is estimated at 15 years.