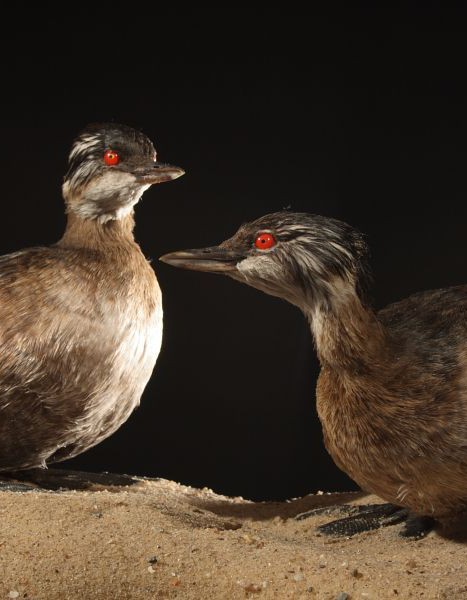 This so elegant water bird has a spectacular courtship, a sort of pas de deux in the middle of the water with reeds only witnesses.
It belongs to the Podicipedidae family.

Both adults are similar. In breeding plumage, the upper parts are greyish brown. The wings are black and white. The back of the neck is black. On the underparts, neck, chest, abdomen and groin are whitish. The body sides and flanks are light tan. The underside and the coverts are white. The head has a pretty spectacular crest on the front of the cap and a kind of remarkable collar around the head, from the cheeks to the back of the crown and nape. This collar is made of chestnut-brown feathers at the base and black at the ends. The face is black and white, with black forehead and crown, cheeks and ear covers are white. The beak is pinkish gray, fairly long, straight and sharp. The eyes are a beautiful deep red. The legs are short. In winter plumage he has no collar and the head is black and white. The plumage of the body becomes duller and grayer. There are three subspecies:

It breeds in fresh or brackish water fringed vegetation, areas of open water for fishing, artificial streams, ponds and backwaters of rivers in slow current. In tropical Africa, it can be seen on the high mountain lakes to 3000 meters. In New Zealand, it attends the lakes up to 1000 meters.
Grebes Palearctic do not support such harsh conditions such as lakes waters partially frozen.

The Great Crested Grebe feeds mainly on fish of varying size and species, insects, aquatic invertebrates, amphibians adults and larvae. It fishes by diving and pursuing its prey underwater, but also on the surface by immersing just head and also pecking insects on aquatic plants

Grebes can prove quite aggressive during the breeding season, which starts from April to June in Europe. In Africa, it can occur at any month of the year or after long rains. In Australia, the peak laying takes place between November and March.

The Great Crested Grebe usually nests alones, it builds the nest on a platform made of aquatic plants. It is generally floating and attached to vegetation or built from plants from the bottom.

The female lays 3 to 5 eggs and produces only one brood, sometimes two. Incubation lasts about 25 to 31 days. The chicks are fed by both parents and are feathered after 70 to 80 days after birth. The family often divided into two parts, and each parent feeding a young couple.
They reach their sexual maturity at two years, but some young birds can find a mate and establish a territory or even reproduce during their first year.

The crested grebe is not threatened.