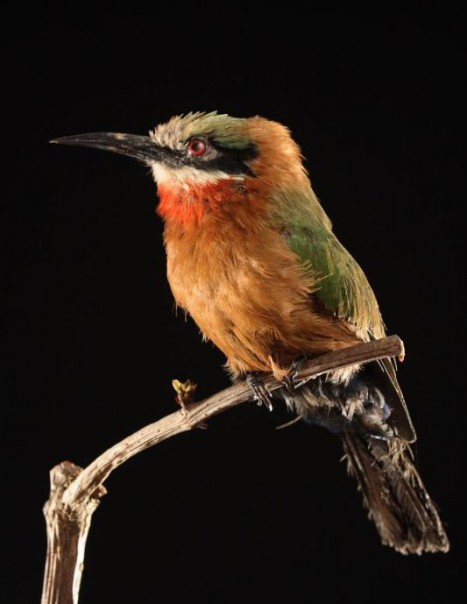 This bird has a fairly large elongated and slender silhouette with long wings. The wings and tail are more green gold. Sometimes, all parties except the rump are heavily shaded with olive bluish discoloration on the rump and tertiary when the feathers are worn. The forehead is yellow and blue eyebrow is poorly marked. There is a large black eye trait forming a mask. The female looks like his partner, but the feathers nets are shorter. Irises are often orange-red.
During the summer, bee-eaters attending Persian deserts, semi-deserts, steppes, dunes, extensive salt, cultivated land, thorny areas and sandy slopes that have small ravines precipices, quarries, mines, pits, dykes and embankments. They nest mainly in sandy deserts, near bodies of water that are lined by tamarisk and reeds. In Africa, outside of the nesting season, bee-eaters of Persia occupy a wide variety of greener and wetter habitats such as savannas, river valleys, woods, lake shores, marshes, reservoirs, dams, irrigation works and farmland. In Sierra Leone, they gather in large numbers in the mangroves.

They nest in Asia, the Middle East, Pakistan, India. An isolated population also nests in North Africa. In winter they migrate during the day and at a great height in the sky to tropical Africa, from Senegal to Cameroon and Mozambique and Angola to Ethiopia.

They are very sociable in all seasons.They form communal roosts in tamarisk, palm trees, reeds, clumps or large casuarina trees. The troops that are deployed on a broad front generally follow the guidelines as a natural coastlines, rivers or mountain ranges, they return to nesting sites in March or April and especially leave in August. They live in East Africa from October to April and in South Africa from November to April. They can be seen above the Nile Valley from January to May in return migration.

The nesting season varies by region: from May to June in Africa in Niger and Mali, in May in Egypt, in mid-October in Senegal and Mauritania in mid-July in Turkmenistan, Pakistan and India, in April-May in the Emirates of Oman.

They are monogamous, they breed in isolated pairs or in colonie. They are found in tunnels, galleries located in the banks of a canal or an irrigation ditch in the wall of a low cliff in embankments, road fill or sand dune swept wind. Laying includes 4 to 8 eggs, incubated by 2 adults during the day and by the female alone at night. The incubation period is 23 to 26 days, youngs leave the nest about 30 days after hatching, which is quite difficult to assess because births are not synchronized. It consumes mostly dragonflies, a wide variety of flying insects, ants, beetles, crickets, grasshoppers, praying mantis, cicadas and butterflies.

Persian bee-eaters are not globally threatened.