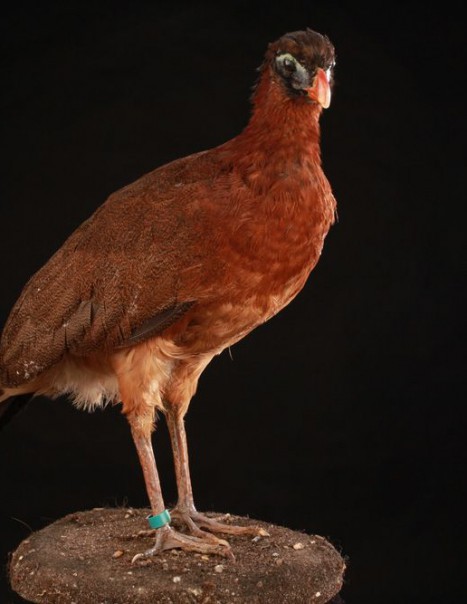 The nocturnal curassow is a bird of the cracids family. Like most of its kind, it is a native of the South American continent. This species is found from Venezuela to Colombia through Peru and in the states of Brazil located on the banks of the Amazon. This bird does not live at altitude. It takes up residence in the “varzeas” flooded rainforest species by water all year or only during seasonal flooding.The nocturnal curassow is characterized by its feathers both long and slightly spatulate. Those on top of the head are black and dull, it is the same for those that cover the underside. Those on the neck and upper chest are brown and shiny. The back feathers of the nocturnal curassow are brown and barred with black wavy lines. Those of the lower abdomen of the owl have tawny.

The eye of hocco is not feathered. The skin that is on the bottom of the eye is gray while that above the iris is azure blue. The male differs from the female by the appearance of its beak. The latter has a color ranging from orange and red.

Contrary to what its name seems to imply, nocturnal curassow is active in the day. Indeed, it has not a keen eyesight like other owls. Thus, it is not able to locate their food at night. It usually comes out when the light is low at dawn and dusk.

There are two nesting seasons; in October and from January to February. This owl builds its nest in a tree at a low height. The female lays two eggs which she incubates for 29 days. The chicks are covered with a brown-black down. Its head is brightly colored, with a large crest and a reddish brown plumage.