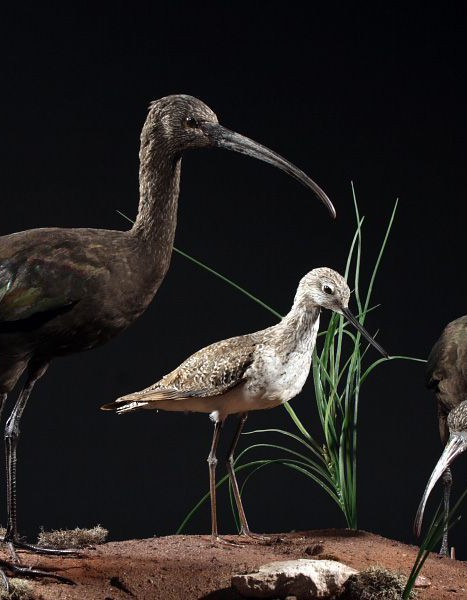 Glossy Ibis – Plegadis falcinellus
At first glance, glossy ibis may seem dark, but if we look more closely we see in reality it is a rust color with beautiful green metallic sheen. Its beak is long, arched downward and thin enough. Its long legs are blackish and perfectly suitable for walking in water. Inter nuptial plumage is duller.Lakes, ponds, pools and swamps, rivers shallow bed and banks are wooded areas of the glossy ibis who find ideal conditions for nesting and food resources. It is a migratory bird. The European population is trans-Saharan but a minority of individuals overwinter on the Mediterranean coast. The species is characterized by strong temporal variations on breeding populations and wintering. We find this locally ibis in Asia, Australia and southeastern Africa.

It nests in trees, often with other herons, spoonbills and cormorants. It builds its nest from thin branches. Between May and July, the female lays 3 to 4 eggs gray-blue colored very deep, there is only one annual laying. Incubation is carried out jointly for 3 weeks. Young can not fly for a month and a half.

Its diet consists of molluscs, worms, insects, larvae, insects, grasshoppers, crickets, frogs. Its feeding site can be several miles away from its nest site if the tree vegetation is not sufficiently developed at the edge of water.

The life expectancy of this bird breeding in Eastern Europe is estimated at 20 years.
Categories: Art & Decoration, Birds