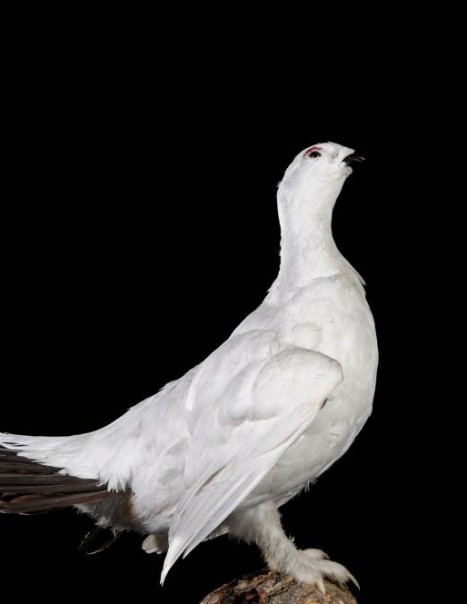 Rock Ptarmigan – Lagopus muta
The rock Ptarmigan is a small bird of the order Galliformes belonging to the family of grouse.
Its way of life is highly dependent on climatic conditions of the environment in which it operates.
Rock ptarmigan measure between 37 and 42 cm and weighs between 400 and 750 g. Its wingspan is 55 to 66 cm. Males have a black stripe that starts from the eye to the tip of its beak and a red lump on the top of the head. This bird is distinguished from other species because it moults three times a year. During the winter season, its feathers are white except the tail remains black. To allow it to move better in the snow, its legs are covered with feathers. In summer, brown and black spots appear on its plumage. Males guard their longer white plumage and are very vulnerable to raptors. In the fall, they become gray with small white spots on the top.
Habitat changes with seasonal variations. In autumn and spring, he chose the most open areas where plants are scattered. Males demarcate territory in rock using observation post females and small. In winter, it remains in the areas covered with bushes near the trees where vegetation is not buried by the snow. Males remain high while the females are sheltered.

The ptarmigan is a vegetarian. The young a special diet supplemented with insects, small spiders and snails. In winter buds, dwarf birch catkins and fine willow branches are part of its diet. In summer they eat plants like blueberries and berries.

Sexual maturity occurs at 12 months. Couples are trained for life. The female builds a nest in an excavation in a rock on the ground level. It will consist of feathers and plants. The female lays 7 to 10 eggs wich are brooded by the female during 21 days. 10 days after hatching, the young are able to feed themself and fly. They will separate at the end of 3 months.

The ptarmigan population is threatened by the construction of tourism facilities in their place of living and because of poaching.