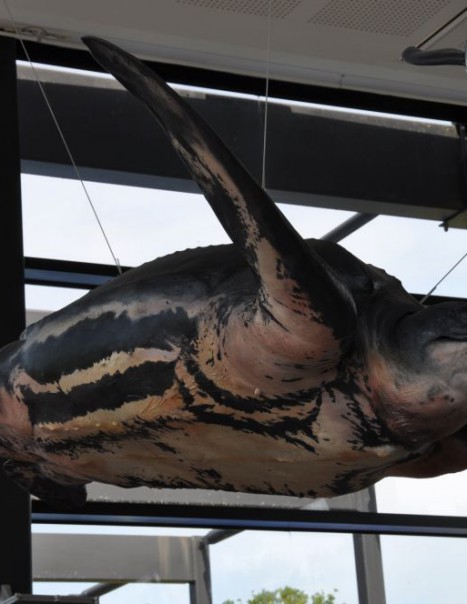 It has no keratinized scales on its shell but a skin dermal bone. It is the only representative of the contemporary family of Dermochelyidae.

The particular anatomy and the most remarkable feature is the absence of visible shell with keratinized scales like most other turtles. At the leatherback turtle, bone structure of the shell is reduced to small ossicles in form of nested stars, inserted in a thick connective tissue and cartilage, forming wavy ridges called hulls that spin from the head to the tail of the animal giving it a streamlined look like the hull of a boat. The back of the animal presents seven hulls: one in the middle is the “vertebral keel”, the other six are the “lateral hulls.” On the belly, the chest pad only has three hulls slightly marked.

This shell is not attached to the spine or ribs, it is separated by a layer of fat, which is unique among living species, back protection is provided by a thickening of the skin, which forms as well a smooth pseudo-shell with the look of leather and weighs an average of 500 kg for a length of about 180 cm. Like other turtles it can not fold back inside its shell.

It is unique in many respects: Its fins are devoid of very long claws, the head is very big, with a poorly developed muzzle. On the upper beak, a median peak can be observed very marked surrounded by two large notches. The inside of the mouth is occupied by a multitude of cones, used both for oxygenation for food, a wide neck connects the head to the shoulders. And the tail is tapered.

The color of the animal’s skin is a very dark blue, shiny and smooth, giving it the look of leather. Its whole body is dotted with small white dots and a task skull. This a unique configuration for each leatherback turtles and scientists believe that it could be used to detect light or spot in space.

This species can live over 50 years. It is an excellent diving since scientists have found several observations up to 1300 m or more than 80 minutes of immersion. Adult, it measures up to 2 meters long and weighing from 450 kg to 950 kg.

Its metabolic three times a reptile of that size, it can withstand cold waters. This allows it to dive more than 1,200 meters deep making it the only reptile that can dive as deep, because reptiles, cold-blooded animals are supposed to be cold-blooded.

The lifestyle, the life and the time it takes to reach sexual maturity are not well known at the present time information.

This species travels thousands of kilometers during its transoceanic journey to reach its feeding grounds. They leave each year to tropical waters polar waters. The leatherback turtle can stay up to eighty minutes diving and jellyfish constitutes the major part of the diet, with fish, shellfish, squid, sea ​​urchins and seaweed. It can consume a daily amount of jellyfish equal to its own weight, up to 50 individuals large jellyfish.

Its has a crucial role in the ecological and economic balance because of its diet. Turtles do not have teeth and jellyfish are difficult to shred, scientists have wondered how they could feed themselves with these animals. It was found that the esophagus is lined with thorns whose function butchering prey.

Sexual maturity of the animal is not well defined, but some scientists could be reached around the age of 6 years and between 10 and 12 years. No scientist has had the opportunity to analyze the coupling, even it is not known where it is held. The male clings to the back of the female with its flexible fins. One fertilization may be sufficient to 4 to 10 pundits. Most observed by scientists is 17 punters, they are always spaced 10 to 15 days and take place from March to July in the Atlantic Ocean and from September to March in the Pacific Ocean.

It is thus the largest and heaviest of live turtles and frequent all the oceans of the planet, but its survival is seriously threatened by poaching, fishing nets, pollution.

It is on the list of endangered species and the subject of international conventions and the protection and conservation programs.