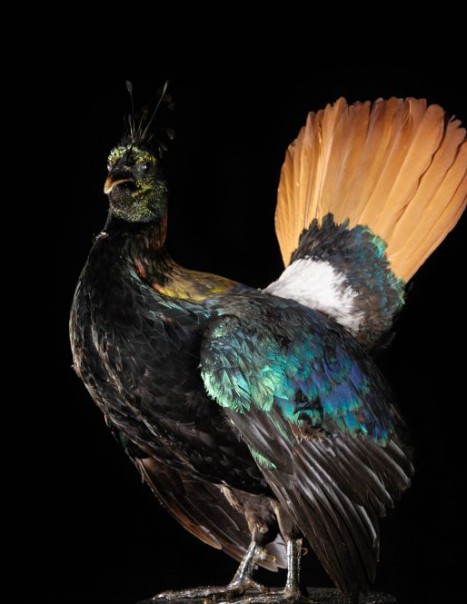 Also known as the impeyan monal, impeyan pheasant, this galliforms belongs to the family of Phasianidae.

In the male, nuptial plumage is decorated with beautiful green, purple, red and blue metallic sheen. The tail is cinnamon colored, rump is white, purple and green. The green and purple back extended by brown and purple wings contrast with the black chest and underparts. The green head is surmounted by a crest of ten feathers with a length of 10 cm erected on the forehead. The neck is purple with spur legs. Females have duller colors. They have a whole brown speckled with black, white and buff stripes. Their throat is white and the hoopoe is modest and unobtrusive. As the males, it has a blue bare skin area around the eyes. The male’s call is a sharp, shrill whistle.

We find the Himalayan monal in Pakistan’s mountainous regions at an altitude of 2400 to 3600 meters. In the Himalayas, they live on the nearby slopes of the tree, in the valleys, planted birch. It is also seen in India and it undertakes an annual migration to lowland valleys. Despite the rigors of mountain climate, the Himalayan monal is sedentary. The links in the band seem to weave in winter when the troops move on a limited territory. In autumn, females wander alone in the company of their chicks. In winter, the companies of 20 to 30 individuals are in the oak forests. During this time a male can stay with several females and their chicks.

In India, the nesting season lasts from late April to late June. Northeast of Afghanistan and Tibet, it spreads from April to July. Nests are placed in woodland, forests offering large trees but with undergrowth. The nest is a simple scrape frequently located under a bush, a rock or in the cavity of a large tree. It is often bare. In nature, the female lays four or five eggs . It happens that the male takes no part in egg incubation and education of chicks. Incubation usually lasts 28 days, in captivity females undertake re-nest in the event of failure of the first brood. The chicks are fed mainly on small invertebrates during the first weeks and their growth is fast enough.

They feed on insects and tubers, key elements of their diet and can vary significantly by region. They also like the roots, the larvae, leaves, shrubs and young shoots of grass and acorns, seeds and berries. In winter, we see it in the fields of wheat and barley in the gullies. Edible mushrooms, wild strawberries, Corinth grapes and feet ferns are also cited as local resources.

The way the Himalayan monal feeds is very characteristic: it digs a hole with its feet and draws the earth with its shaped shovel beak, its excavation is deep until it finds its food.