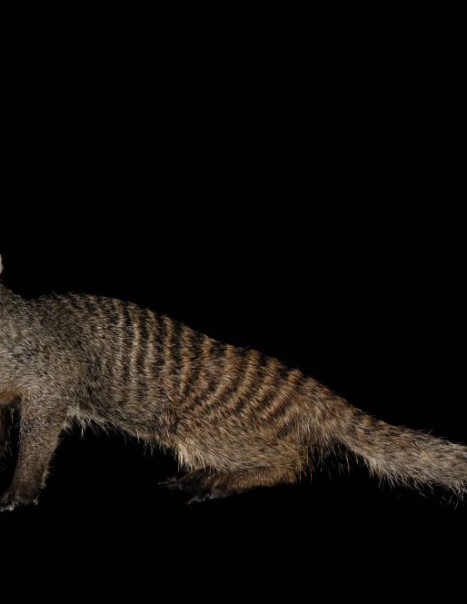 Mongoose is a set of 33 species of carnivorous mammals living in South-east Asia, Africa, Southern Europe and the Caribbean. Its length varies from 30 cm to 1.20 m and weighs between 280 g to 4.10 kg.

With its elongated body and a pointed snout, small rounded ears, short legs and long, tapered tail, reminds amazingly weasel and mink. Some graying or spotted and some have a more pronounced fur. Mongoose can not retract its claws used to dig. Mongoose is a terrestrial animal, but some species can swim and dive or climb trees. In general, it lives in open forests, savannas, semi-arid regions and deserts. Many species dig themselves the burrows and some occupy those vacant or other cavities. There are diurnal mongoose while some only hunt at night.

Mongoose is a carnivorous species. Its main diet consists of insects. Earthworms and small animals are also part of the menu in addition to the lizards, rodents and crabs. They also eat eggs, sometimes simply carrion and is also frugivorous. But is best known as a fearsome killer poisonous snake. It is not completely immune against the poison, but its body is pretty protected due to its speed and agility.

The most common species, mongoose Egypt – Herpestes ichneumon ichneumonou – is an example of a solitary mongoose but is sometimes seen in acting group. It is the only one to be present in Europe in the south of Portugal and Spain. For cons, the meerkat Suricata suricatta lives in groups of 20 to 30 individuals in open areas in southern Africa. It has a well-developed social system. Some species are domesticated and used as pet protect the house pests, it is the case for example of the Indian mongoose, killer cobras.

Mongoose breeds all year and gives birth to a range of 2 to 4 young. Gestation length is 35 to 70 months. It emits high pitched screams as a kind of sneer during mating and during courtship displays.

Because it causes havoc on small animals, some species are prohibited imports in some countries like the United States, Australia and New Zealand.