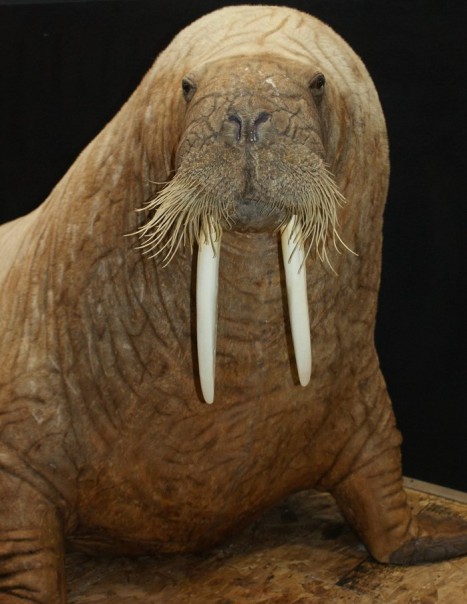 Walrus – Odobenus rosmarus
The walrus is a huge marine mammal, which can live both in the water or out of the water. It measures up to 3 meters long and weighs around 900kg. However, its weight can reach 2 tons. It has a resemblance to the seal, except that its canines exceed its mouth and its legs serve as fins. These fins measuring a quarter of its total length allows it to swim at a speed of 35km per hour.

Adult walruses are easily recognized by their prominent tusks, whiskers and bulkiness.

The walrus has a small head and a thick neck. It looks moustaches with its short and wide muzzle, filled with stiff hairs like thorns. It also has a visibly smooth skin and all wrinkled. It is a very thick skin and full of fat. Walruses are dark reddish brown that turns cinnamon brown with age.  In the sun, they become pretty pink and in water they may seem white. Walruses have a very short tail, often hidden by the folds of skin. Such as seals, they have no external ears. They are known to be mammals having the longest penis. Their baculum or penis bone can reach a length of 63cm.

From time to time out of the water, walruses spend much of their lives on the ice blocks, but they mostly live in the seas. There are many in the Arctic seas of Greenland to Siberia. They feed mainly on mollusks and invertebrates.

Walruses males reach sexual maturity at the age of 7. However, they do not occur at the age of 15 years. Their mating season begins in January and ends in March. Gestation lasts within 15 months and the young are born covered with a velvety coat. Walrus baby weighs about 60 kg at birth, and it is already able to swim. It will be autonomous at the end of its fourth year. Female walrus may adopt orphans.