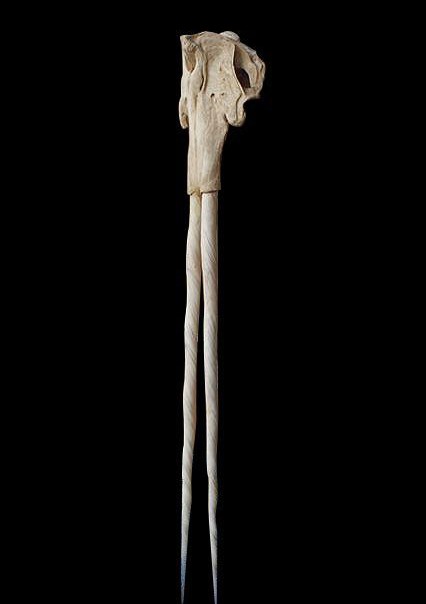 Nicknamed the unicorn of the sea, the narwhal is a cetacean.

Males have a single twisted-defense, after the left upper incisor, which can measure up to three meters long. The rarity of the narwhal and its shrinking habitat has contributed to the persistence of the legend.

Then regarded as a weapon or tool, narwhal defense is discussed today as a sensory organ whose rich nerve endings allow the animal to perceive the differences in pressure, salinity or temperature.

The animal itself has a length of 4 to 5 meters and lives in groups in the Arctic Ocean. The Latin name Monodon monoceros is derived from Greek and means “one tooth, single horn”. We have long presented the narwhal horn as a hunting weapon to spear fish or a tool to break the ice to allow the narwhal breathe in air, but females who do not have this appendix have the same power and must also breathe oxygen in air at regular intervals between 7 and 20 minutes.

The narwhal live to 50 years. Males reach sexual maturity at 8 to 9 years old and females between 4 to 7 years. The gestation period is about 15 months. The couplings are made in the spring in April and births happen the following year in July, where the females nurse their young for 4 months. Like many other cetaceans, it is found that the rate of reproduction is affected downwards by human activity and its pollutants.

They are mammals with a small rounded head and with a small round mouth. They have small fins tucked up. Like other Arctic whales, they have no dorsal fins and are isolated from the cold by a thick vascularized fatty layer. Males can weigh up to 1,600 kg to 5 meters in length while their horn can reach 3 meters long. Females are smaller and can reach 1000 kg and 4 meters long. At birth, the young weigh 80 kg and measure 1.5 meters.

The color changes according its age, at birth it is blue gray or brown, with youth age it will be blue-black; adult it will be black. Then more narwhal ages, more skin will be covered with white spots as to become almost white.

Its horn is actually a tooth left maxillary at the male, which is also present in 10% of females. It starts pushing through the upper lip at puberty, at the age of one year, and its growth rate increases to sexual maturity around 8 or 9 years. It acquires a considerable length of 2.5 to 3 m and weighs 10 kg. It is still twisted from right to left.

The symmetrical tooth of the two corresponding male and female teeth remain rudimentary and do not protrude from the cell. Exceptionally 1 in 500 males are encountered with two tusks.
So this tooth is an extremely sensitive sensory detection member paradoxically, is bathed in the icy waters. Another particular fact, this tooth is rigid appearance, is actually flexible. A tooth of 2.40 m in length can bend up to 0.30 m in any direction without breaking.
If it is damaged, it can repair itself to some degree, but if it breaks, it does not grow back. The enamel is very thin, the tooth breaks easily: the male can then achieve a “seal” to prevent the formation of caries. It can fill the hole at the tip of the tooth by gravel or cause a young male in a duel for the latter to put the tip of its horn into the hole in its tooth, then break, forming a plug.