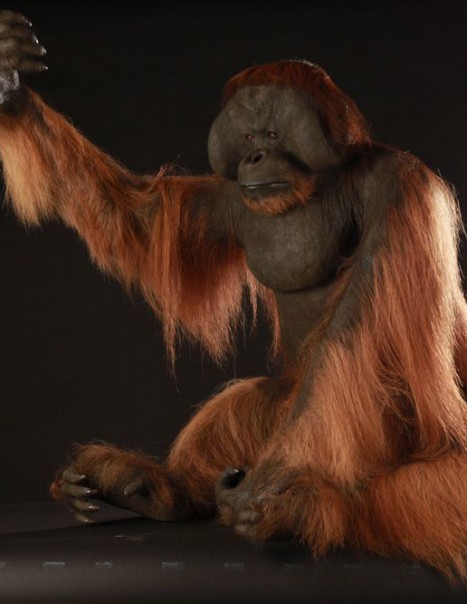 Orangutans are apes of the family of hominids.
They are common in the islands of Borneo and Sumatra. They are interested by geneticists and biologists who study human evolution since they belong to the superfamily of hominoid primates. The orangutan is the closest of the hominoid ancestor to humans and great apes. According to the criteria adopted, they would have about 3 to 4% genetic differences with the human species .The name “orangutan” comes from the Malay orang hutan, which literally means “man of the forest”, although the Borneo population is six or seven times more than those of Sumatra. The comparison showed that these two species diverged there are around 400.000 years, or more recently than previously thought. It was also found that the genome of orang utans evolved much more slowly than that of chimpanzees and humans.

The species of this genus are found in Sumatra, Borneo, Indonesia, and Malaysia. Formerly it was also found on the island of Java. The scientific names of the two species are the Orang – utans in Sumatra – Pongo abelii Lesson, and Orang – utans of Borneo – Pongo pygmaeus.

The average size of the orangutan is 1.10 to 1.40 m for 40 to 80 kg. They can live 30 to 40 years. Gestation lasts 245 days. Young orangutans traveling hung back or womb for more than two years. Births are spaced with a gap of about eight years on average. They spend most of their time in trees, looking for food. The animal feeds most of the time on fruit, shoots, bark, small vertebrates, bird eggs and insects. Every night they make a new nest perched between 12 and 18 meters above the ground.

They are remarkably intelligent.