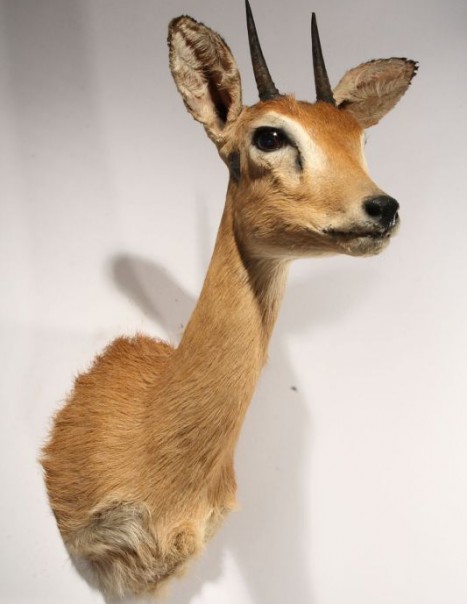 The Oribi is the only species of the genus Ourebia. It is part of the small family of dwarf antelopes like Steenboks, the Dik dik and the klipspringer.

It is widespread in Africa, the Sahara, Senegal, Mali, Malawi, Ethiopia, Ghana, Somalia, Gambia, Cameroon, Niger, Central African Republic, Kenya, Tanzania, Botswana, Ivory Coast, Guinea, Rwanda, Benin, Uganda , Chad, Togo, Angola, Mozambique, Zimbabwe, Zambia, South Africa. This antelope likes the Bush, the savannah, plains as mountains but always near water, up to 3000 meters.
It measures 90 to 110 cm in length and weighs 8 to 20 kg. In case of danger, it can jump and reach a maximum speed of 40 to 50 km/h.
Only the male has two horns, which is rare among antelopes and the female is larger and fatter than the male.It is diurnal and crepuscular, very active during the hot hours of the day, it remains hidden in the tall grass near the bushes and feeds the morning, late in the afternoon and during the full moon.The gestation lasts between 5 to 6 months. The young born at the beginning of the rainy season, weighing no more than 1.5 to 2 kg. It is weaned after 2 months, but drop the soft grass after a week. It is an adult at the age of one.The diet of this herbivore is grass, leaves, bushes. It regularly drink, though it may abstain if necessary for some time.

Their predators are leopards, lions, cheetahs, servals, caracals, eagles, pythons, crocodiles, jackals, hyenas, wild dogs. Its lifespan is estimated at 8 to 12 years, and 14 years in captivity.